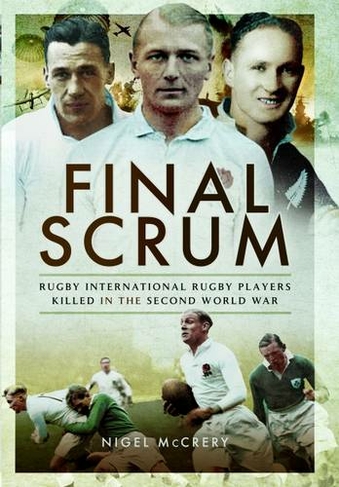 After the terrible losses of The Great War, twenty years later the Second World War resulted in the death of some of the finest sporting icons. This book honours the ninety international rugby players who lost their lives. Fifteen were Scottish, fourteen English, eleven Welsh and eight Irish. Australia and New Zealand suffered with ten and two internationals killed respectively and France eight. Germany topped the list with nineteen. In the same way that the Authors best-selling Into Touch remembered the 130 Internationals lost in the First World War, Final Scrum gives an individual biography of each of the ninety with their international and club playing record as well as their backgrounds, details of their military careers and circumstances of their death. We learn where they are buried or commemorated together with at least one photograph of each player. Rugby enthusiasts will find this book a fascinating and moving record of the sacrifice of the finest young men of their generation who fought in the second worldwide conflict of the 20th Century. 16 pages b&w plates

Born in 1953, Nigel McCrery travelled extensively during his childhood as his father was in the RAF. They settled in Nottingham. He served in the Nottinghamshire Constabulary between 1978 and 1987. He then read History at Trinity College, Cambridge and joined the BBC graduate entry course. He has written or been responsible for a number of highly successful BBC series and films including Silent Witness, New Tricks and All The Kings Men. He has written over a dozen novels. Into Touch - Rugby Players Killed in The Great War is in print with Pen and Sword Military, as is The Extinguished Flame Olympians Killed in The Great War and Final Wicket Test and First Class Cricket Players Killed in The Great War . Nigel lives in Nottingham.