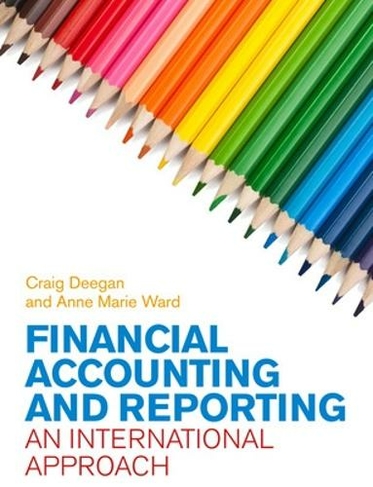 Financial Accounting and Reporting: An International Approach is an adaptation of McGraw-Hill Australia's bestselling financial accounting text Australian Financial Accounting by Craig Deegan, authored by Anne Marie Ward of Ulster University. Set within an international context, with a solid grounding in IAS/ IFRS, the book provides students with a detailed grasp of reporting requirements in and accessible and engaging manner. Up to date throughout and complete in theoretical and practical coverage, the book successfully communicates the detail necessary to understand, challenge and critically evaluate financial reporting. The result gives students a strong foundation for current study and their future professional lives.

Dr. Anne Marie Ward is a Professor of Accounting in the Department of Accounting, Finance and Economics at the University of Ulster at Jordanstown, Northern Ireland. She is also a qualified Chartered Accountant. Craig Deegan, BCom (University of NSW), MCom (Hons) (University of NSW), PhD (University of Queensland), FCA, is Professor of Accounting at RMIT University in Melbourne. Prior to this appointment, and between 1996 and 2001, he was Professor of Accounting and Faculty Director of Research and Research Higher Degrees at the University of Southern Queensland. He has taught at Australian universities for two decades in both undergraduate and postgraduate courses, and has presented lecturers internationally, including in New Zealand, the United States, France, England, Wales, Scotland, Malaysia, Singapore, South Africa, South Korea and China.Prior to his time in the university sector, Craig worked as a chartered accountant in practice. He is an active researcher with numerous publications in Australian and international professional and academic journals (any NZ ones, and he regularly provides consulting services to corporations, government, and industry bodies. Craigs main research interests are in the area of social and environmental accountability and reporting, and between 1997 and 2003 he was Chairperson of the Triple Bottom Line Issues Group of the Institute of Chartered Accountants in Australia. He has been the recipient of various teaching and research awards, including teaching prizes sponsored by KPMG, and the Institute of Chartered Accountants in Australia. In July 1998 he was the recipient of the Peter Brownell Manuscript Award, an annual research award presented by the Accounting Association of Australia and New Zealand (now known as the Accounting and Finance Association of Australia and New Zealand). In 1998 he was also awarded the University of Southern Queensland Individual Award for Research Excellence.Craig is also the author of the leading financial accounting theory textbook, Financial Accounting Theory, which is widely used throughout Australia as well as a number of other countries such as the UK, US, The Netherlands and South Korea.