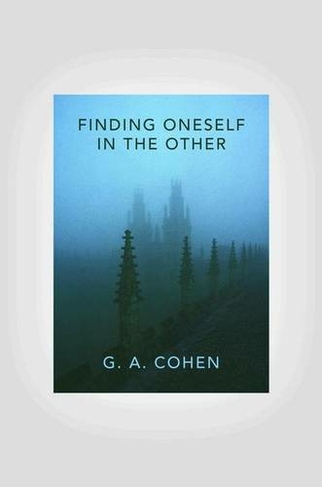 Finding Oneself in the Other

Also available on eBook for £17.27. Click here to purchase from Rakuten Kobo

This is the second of three volumes of posthumously collected writings of G. A. Cohen, who was one of the leading, and most progressive, figures in contemporary political philosophy. This volume brings together some of Cohen's most personal philosophical and nonphilosophical essays, many of them previously unpublished. Rich in first-person narration, insight, and humor, these pieces vividly demonstrate why Thomas Nagel described Cohen as a "wonderful raconteur." The nonphilosophical highlight of the book is Cohen's remarkable account of his first trip to India, which includes unforgettable vignettes of encounters with strangers and reflections on poverty and begging. Other biographical pieces include his valedictory lecture at Oxford, in which he describes his philosophical development and offers his impressions of other philosophers, and "Isaiah's Marx, and Mine," a tribute to his mentor Isaiah Berlin. Other essays address such topics as the truth in "small-c conservatism," who can and can't condemn terrorists, and the essence of bullshit. A recurring theme is finding completion in relation to the world of other human beings. Engaging, perceptive, and empathetic, these writings reveal a more personal side of one of the most influential philosophers of our time. 1 line illus. 1 table.