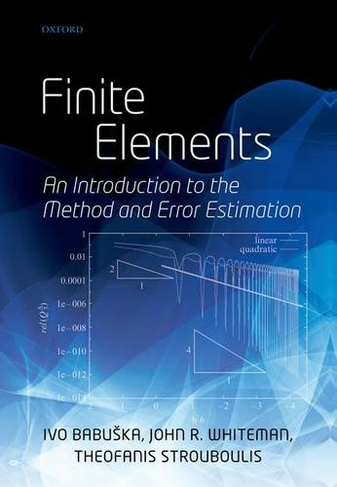 Finite Elements An Introduction to the Method and Error Estimation

Most of the many books on finite elements are devoted either to mathematical theory or to engineering applications, but not to both. This book seeks to bridge the gap by presenting the main theoretical ideas of the finite element method and the analysis of its errors in an accessible way. At the same time it presents computed numbers which not only illustrate the theory but can only be analysed using the theory. This approach, both dual and interacting between theory and computation makes this book unique. Much research is currently being done into reliability in computational modelling, involving both validation of the mathematical models and verification of the numerical schemes. By treating finite element error analysis in this way this book is a significant contribution to the verification process of finite element modelling in the context of reliability. 99 b/w line illustrations

Ivo Babuska was born in Prague, Czechoslovakia, studied civil engineering at the Technical University, Prague, and became the Head of the Department of Partial Differential Equations of the Institute of Mathematics, Czech Academy of Sciences, where he received the degree of Dr Tech. In 1955 he took his PhD in Mathematics and in 1960 his DSc in Mathematics. In 1968, he moved to the US to become a Professor at the University of Maryland, College Park. In 1995 he movedto the University of Texas at Austin as the Robert B Trull Chair in Engineering, and Senior Research Scientist. He has throughout worked in the field of Finite Element Methods. Together with Werner Rheinboldt he published the first seminal paper on a posteriori (computable) error estimates forfinite element methods, and he is now considered a world authority in the field. He has published four books and more than 150 papers on finite elements, and has received four Doctorates Honoris Causa and many prizes and medals.John Whiteman studied mathematics at the Universities of St Andrews, Oxford, and London where he obtained his PhD in numerical analysis. After periods at the University of Wisconsin, Madison and the Department of Computer Sciences at the University of Texas at Austin, he joined the Mathematics Department at Brunel University, UK to lead research in numerical analysis, and in particular in finite element methods. He has held numerous visiting professorships, including the Richard MertonGastprofessorship at the Westfalische Wilhelms University, Munster, in 1975/76. In 1976 he became Founder Director of BICOM, the Brunel Institute of Computational Mathematics, and Professor of Numerical Analysis at Brunel University, becoming Distinguished Professor in 2004. He has published over 125papers, has edited 10 books and has been awarded one Doctorate Honoris Causa.. He is also famous as the organiser of the world renowned MAFELAP Conferences on the Mathematics of Finite Elements and Applications.Theofanis Strouboulis was born in Piraeus, Greece. He studied civil engineering at the National Technical University of Athens, and then attended the University of Texas at Austin where he earned both his MS and PhD degrees in Engineering Mechanics. After a two-year post-doctoral study in Austin he joined the Department of Aerospace Engineering at Texas A&M University in 1989, where he is currently a Professor. He has worked with Ivo Babuska since 1991, writing a series of papers on thereliability of error estimators, culminating in the monograph 'The Finite Element Method and Its Reliability' (OUP 2001). He has published more than 42 papers and has more than 1260 citations. He has made important contributions to a posteriori error estimation for finite element methods and to thedevelopment of the generalized finite element method.