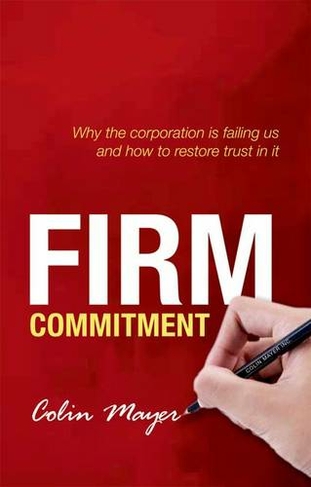 Firm Commitment: Why the corporation is failing us and how to restore trust in it

The corporation is one of the most important and remarkable institutions in the world. It affects all our lives continuously. It feeds, entertains, houses and, employs us. It generates vast amounts of revenue for those who own it and it invests a substantial proportion of the wealth that we possess. But the corporation is also the cause of immense problems and suffering, a source of poverty and pollution, and its failures are increasing. How is the corporation failing us? Why is it happening? What should we do to restore trust in it? While governments are subject to repeated questioning and scrutiny, the corporation receives relatively little attention. Firm Commitment provides a lucid and insightful account of the role of the corporation in modern society and explains why its problems are growing. It gives a fresh perspective on the crises in financial markets, developing countries, and the environment. Based on decades of analysis and research, it describes a new approach to thinking about the firm which not only stops it destroying us but turns it into the means of protecting our environment, addressing social problems, and creating new sources of entrepreneurship and innovation. It sets out an agenda for converting the corporation into a twenty-first century organization that we will value and trust. It takes you on a journey that starts in the Galapagos, ends in Ancient Egypt, and in the process brings you to a new level of appreciation of the economic world we inhabit.

Colin Mayer is former Dean of the Said Business School at the University of Oxford. He is an Honorary Fellow of Oriel College, Oxford and of St Anne's College, Oxford. He is an Ordinary Member of the Competition Appeal Tribunal and a Fellow of the European Corporate Governance Institute (ECGI). He has served on the editorial boards of several leading academic journals and assisted in establishing the prestigious networks of economics, law and finance academics inEurope at the Centre for Economic Policy Research (CEPR) and ECGI. He was a Harkness Fellow at Harvard University, a Houblon-Norman Fellow at the Bank of England, and the first Leo Goldschmidt Visiting Professor of Corporate Governance at the Solvay Business School, Universite de Bruxelles. He was adirector of Oxera between 1986 and 2010 and was instrumental in building the firm into what is now one of the largest independent economics consultancies in the UK.