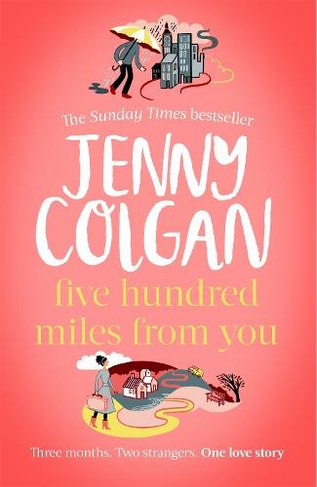 By Jenny Colgan (Author)
Hardback
https://www.whsmith.co.uk/products/five-hundred-miles-from-you/jenny-colgan/hardback/9780751578706-12-000.html £10.65 rrp £12.99 Save £2.34 (18%)
GBP
Availability
In Stock
Free Delivery Available When You Spend £15 Or More
Details
Spend £15 On Eligible Products To Receive Free Standard Delivery To You Home Or Free Next Working Day Click And Collect To Store
Share

'Nobody does cosy, get-away-from-it-all romance like Jenny Colgan' Sunday Express 'A sheer delight from start to finish' Sophie Kinsella ___________________________________ They live five hundred miles apart. Yet their lives are about to collide . . . Curl up and escape with Jenny Colgan 'An evocative, sweet treat' Jojo Moyes 'This sweet romance will lift your spirits' Sunday Mirror 'Gorgeous, glorious, uplifting' Marian Keyes 'Irresistible' Jill Mansell 'Just lovely' Katie Fforde 'Naturally funny, warm-hearted' Lisa Jewell 'A gobble-it-all-up-in-one-sitting kind of book' Mike Gayle ___________________________________ Lissa loves her job as a nurse, but recently she's been doing a better job of looking after other people than looking after herself. After a traumatic incident at work leaves her feeling overwhelmed, she agrees to swap lives with someone in a quiet village in Scotland. Cormac is restless. Just out of the army, he's desperately in need of distraction, and there's precious little of it in Kirrinfief. Maybe three months in London is just what he needs. As Lissa and Cormac warm to their new lives, emailing back and forth about anything and everything, finally things seem to be falling into place. But each of them feel there's still a piece missing. What - or who - could it be? And what if it's currently five hundred miles away? ___________________________________ Why readers ADORE Jenny Colgan 'Jenny Colgan has a way of writing that makes me melt inside' 'Her books are so good I want to start over as soon as I have finished' 'There's something so engaging about her characters and plots' 'Her books are like a big, warm blanket' 'Her stories are just so fabulous' 'She brings her settings and characters so vividly to life' 'The woman is just magic'

Jenny Colgan is the author of numerous Sunday Times bestselling novels and has won various awards for her writing, including the Melissa Nathan Award for Comedy Romance, the RNA Romantic Novel of the Year Award and the RNA Romantic Comedy Novel of the Year Award. Her books have sold more than five million copies worldwide and in 2015 she was inducted into the Love Stories Hall of Fame. Jenny is married with three children and lives in Scotland.For more about Jenny, visit her website and her Facebook page, or follow her on Twitter and Instagram.Twitter: @jennycolganFacebook: jennycolganbooksInstagram: jennycolganbooks