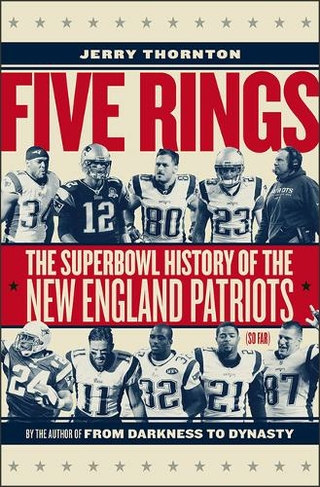 By Jerry Thornton (Author)
Hardback
https://www.whsmith.co.uk/products/five-rings--the-super-bowl-history-of-the-new-england-patriots-so-far/jerry-thornton/hardback/9781512602715-12-000.html £20.70 rrp £23.00 Save £2.30 (10%)
GBP
Availability
In Stock
Free Delivery Available When You Spend £25 Or More
Details
Spend £25 On Eligible Products To Recieve Free Standard Delivery To You Home Or Free Next Working Day Click And Collect To Store
Share

Since 2001 the Patriots have played in eight Super Bowl championships and won five, a run of excellence unparalleled in all of professional sports. In a league designed to ensure that no one franchise can dominate over time, New England won for over a decade and a half. A dynasty that began with an improbable run to a championship in 2001 has rebuilt, rebooted, and retooled several times over, winning most recently in 2017. But in those years, no other franchise reached the same level of controversy, drama, and turmoil-or even came close. Jerry Thornton, bestselling author of From Darkness to Dynasty, provides an all-access pass to the Patriots' years of unparalleled greatness from the unique perspective of an observant, obsessive, utterly dedicated fan.

JERRY THORNTON is a founder of Barstool Sports and a cohost of the daily Dale and Holley Show on WEEI, Boston s leading sports radio station. In addition, Jerry is a standup comic who won the Boston Comedy Riot competition and has worked colleges and clubs all around New England. He has appeared on HBO's Emmy Award-winning "Curse of the Bambino" and Comcast Sports New England and has written for ColdHardFootballFacts.com.