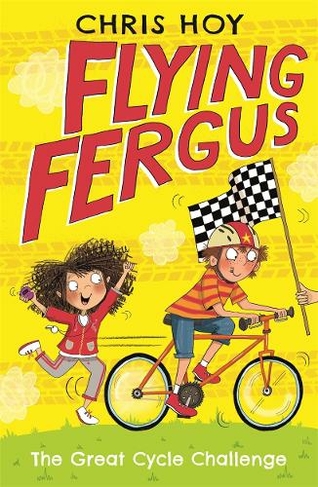 The second in Sir Chris Hoy's fantastically fun, magical cycling adventure series. Fergus Hamilton lives and dreams bikes and is really excited about training for the Great Cycle Challenge with his friends. But he's also got a secret. If the pedals on his bike spin backwards, he's magically transported to to Nevermore, where cycling is banned and his dad is a prisoner. Princess Lily wants to help, but first they'll need to brave the spooky abandoned Bicycle Graveyard. . . Written with award-winning author Joanna Nadin, with fantastic illustrations from Clare Elsom. "Champion cyclist Chris Hoy breathes his passion for cycling into this entertaining and imaginative adventure about an ordinary boy and his big cycling dreams." The Guardian

Sir Chris HoySir Chris Hoy MBE was born and raised in Edinburgh. He raced BMX until he was 14. Chris won his first world medal in 1999 - a silver in the Team Sprint - and has won 11 world and two Commonwealth titles to date. Chris won his first Olympic gold medal in Athens in 2004 and went on to win three gold medals at the Beijing Olympics. In 2012 at his home Olympic Games in London, Chris won his fifth and sixth gold medals- in the Keirin and Team Sprint- becoming Great Britain's most successful Olympic athlete of all time with six gold medals and one silver. Chris was voted BBC Sports Personality of the Year in 2008 and awarded a Knighthood in 2009. Follow Chris at www.chrishoy.com or on Twitter: @chrishoyJoanna NadinJoanna Nadin is the author of more than 70 books for children and young people. She has been shortlisted for the Roald Dahl Funny Prize and is a former broadcast journalist and Special Adviser to the Prime Minister. She lives in Bath. Follow Joanna at www.joannanadin.com on Twitter: @joannanadin