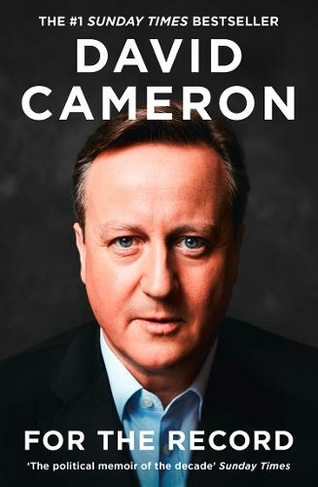 'The political memoir of the decade' Sunday Times The referendum on Britain's membership of the EU is one of the most controversial political events of our times. For the first time, the man who called that vote talks about the decision and its origins, as well as giving a candid account of his time at the top of British politics. David Cameron was Conservative Party leader during the largest financial crash in living memory. The Arab Spring and the Eurozone crisis both started during his first year as prime minister. The backdrop to his time in office included the advent of ISIS, surging migration and a rapidly changing EU. Here he talks about how he confronted those challenges, from modernising a party that had suffered three successive electoral defeats to forming the first coalition government for seventy years. He sets out how he helped turn around Britain's economy, implementing a modern, compassionate agenda that included education and welfare reform, the legalisation of gay marriage, the referendum on Scottish independence and world-leading environmental policies. David Cameron is searingly honest about the key players from his time in politics. And he is frank about himself - the things he got right and the things he got wrong. He opens up about family life too, including the tragic loss of his eldest son. We learn why he kept Britain's promise on overseas aid spending and what it was like to commit British troops to conflicts in Libya, Iraq and Syria. He sets out how he won the first outright Conservative majority in nearly a quarter of a century, and describes the events leading up to the EU referendum, the renegotiation, the campaign - and his thoughts on it all today. It is the most compelling record yet of what it's like to lead in modern times and to live behind the most famous door in the world.

David Cameron was elected Conservative leader in 2005 and in 2010 became Prime Minister after forming the UK's first coalition government for 70 years. Following five years of economic transformation and radical reform, he won the first Conservative majority in a quarter of a century. In 2016 he stood down after his referendum on Britain's membership of the European Union resulted in a vote to leave.