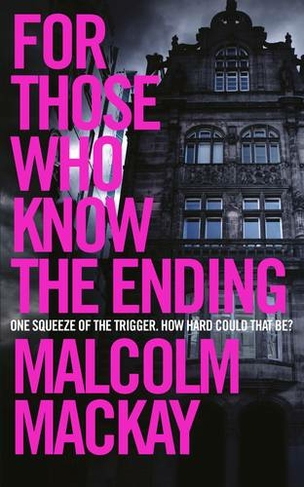 For Those Who Know the Ending

A multi-layered and unnerving portrait of gangland Glasgow, For Those Who Know the Ending is the gripping novel from the award-winning author of The Glasgow Trilogy, Malcolm Mackay. He has to clear thoughts of Joanne and thoughts of the past out of his mind. He has to think about himself, his situation. Think about the next hour . . . In that hour, everything will be decided. It's been almost two hours. Two hours, and Martin Sivok is still tied up, alone in a darkened warehouse; plastic strips digging into the soft flesh of his wrists. He wants them to come back. Get this over with. But he also knows that as soon as they return, this could very well be his ending. Because Martin has messed up. Stolen dirty money he should never have touched. Dirty money that the Jamieson organization, the most dangerous criminal outfit in Glasgow, wants back. Someone has to die for this. And over the next few hours, he has to work out how that somebody can be anyone but him . . .

Malcolm Mackay was born and grew up in Stornoway where he still lives. The Necessary Death of Lewis Winter, his much lauded debut was the first in the Glasgow Trilogy, set in the city's underworld. It was shortlisted for the CWA John Creasey New Blood Dagger Award for Best Crime Debut of the Year and the Scottish First Book of the Year Award and was chosen as Best Read by ITV3's Specsavers Crime Thriller Club programme. How A Gunman Says Goodbye, the second book in the series, won the Deanston Scottish Crime Book of the Year Award. The final book in the trilogy is The Sudden Arrival of Violence. His other crime novels include For Those Who Know the Ending, Every Night I Dream of Hell and In the Cage Where Your Saviours Hide.