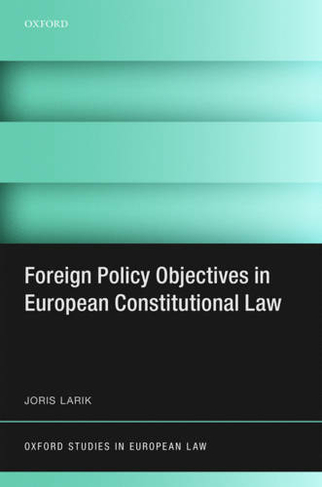 Also available on eBook for £72.35. Click here to purchase from Rakuten Kobo

Presenting the first comprehensive account of foreign policy objectives as a growing part of European constitutional law, Joris Larik confronts the trend of enshrining international ambitions in the highest laws of states and the European Union. Closely examining the provisions of foreign policy objectives, Larik differentiates their legal force and functions, situating them into the overall legal order of the state, the EU, and the composite 'European constitutional space'. He argues that the codification of foreign policy objectives suggests a progression in the evolution of the role of the constitution: from limiting public authority to guiding it towards certain goals, both at home and in the wider world. Advancing a comparative constitutional perspective for the study of EU external relations, this volume contributes a constitutional dimension to the 'normative power' debate in the study of EU foreign policy. Drawing on established national doctrines on constitutional objectives from Germany, France, and India, the book provides a common vocabulary for coming to terms with foreign policy objectives as legal norms across different jurisdictions. In the pluralist context and closely intertwined legal orders of the EU and its Member States, it shows how objectives help to channel the individual ambitions of the Member States through the Union framework towards a more coherent external action. Furthermore, the book connects its legal findings with the debate on the EU as an actor in international relations, exploring the role of these norms in inter-institutional struggles and processes of identity-shaping, legitimation, and socialization.

Dr. Joris Larik is Assistant Professor of Comparative, European, and International Law at Leiden University, Senior Researcher at The Hague Institute for Global Justice, and Associate Fellow at the Leuven Centre for Global Governance Studies. His work focuses on the law and policy aspects of regional organizations as actors in world politics, comparative and multilevel constitutional law, and global governance reform.Dr Larik's work has been acknowledged with several awards, including the NATO Manfred Woerner Essay Award (2008), the Outstanding Paper Award from the Center for German and European studies at Georgetown University (2012), and the Mauro Cappelletti Prize for the Best Thesis in Comparative Law (2014) from the European University Institute (EUI). In 2014-15, Dr. Larik served on the core project team for the Report of the Commission on Global Security, Justice &Governance, co-chaired by former U.S. Secretary of State Madeleine Albright and former Nigerian Foreign Minister Ibrahim Gambari.