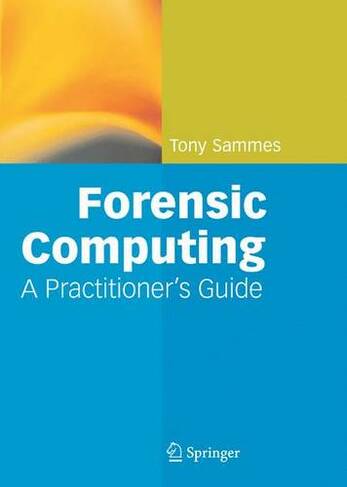 In the second edition of this very successful book, Tony Sammes and Brian Jenkinson show how the contents of computer systems can be recovered, even when hidden or subverted by criminals. Equally important, they demonstrate how to insure that computer evidence is admissible in court. Updated to meet ACPO 2003 guidelines, Forensic Computing: A Practitioner's Guide offers: methods for recovering evidence information from computer systems; principles of password protection and data encryption; evaluation procedures used in circumventing a system's internal security safeguards, and full search and seizure protocols for experts and police officers. 178 Tables, black and white; 196 Illustrations, black and white; X, 470 p. 196 illus.

Until 1984, Professor A. J. Sammes was a serving British Army Officer with the rank of Colonel, late of the Royal Corps of Signals. His present appointment is Professor of Computing Science, in the Faculty of Military Science, Technology and Management at the Defense Academy, Cranfield University, Shrivenham.His formal qualifications include a Bachelor of Science in Electrical Engineering, a Master of Philosophy in Computer Science and a Doctor of Philosophy in Computer Science, all degrees having been awarded by the University of London. He is also a Fellow of the British Computer Society and a Chartered Engineer.His department has been more or less solely responsible for training senior police officers in the UK in the art of forensic computing. His testimony as an expert witness has been called in countless cases, of some of great national importance.