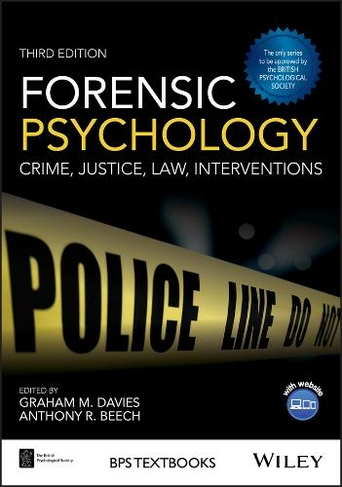 Also available on eBook for £34.99. Click here to purchase from Rakuten Kobo

Forensic Psychology is essential reading for all undergraduate courses in forensic psychology, and an excellent introduction for more detailed postgraduate courses. Expert authors cover every aspect of forensic psychology, from understanding criminal behaviour, to applying psychological theory to criminal investigation, to analysis of the legal process and the roles of witnesses, to the treatment of offenders. The Third Edition includes two entirely new chapters on psychopathy and crime and female offenders, and all chapters have been thoroughly revised and updated.

Graham Davies is Emeritus Professor of Psychology at the University of Leicester and an Honorary Professor of Forensic Psychology at the Universities of Birmingham and Coventry, UK. His research interests focus on the testimony of children and adults and the support of vulnerable witnesses at court, on which topics he has published 10 books and over 150 articles in scientific journals. He is a Fellow of the British Psychological Society and a former president of the Society for Applied Research in Memory and Cognition and of the European Association for Psychology and Law. Anthony Beech is a Professor and Head of the Centre for Forensic and Criminological Psychology at the University of Birmingham, UK. He has authored over 140 peer-reviewed articles, 39 book chapters and 5 books in the area of forensic science/criminal justice. He is a Fellow of the British Psychological Society and was the recipient of the Senior Award from the British Psychological Society Division of Forensic Psychology for a significant lifetime contribution to Forensic Psychology in 2009. He also received the Significant Achievement award from the US-based Association for the Treatment of Sexual Abusers (ATSA) in 2009.