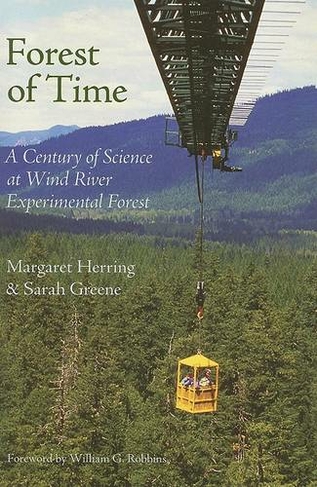 Forest of Time: A Century of Science at Wind River Experimental Forest

The Wind River Experimental Forest has been called the cradle of forestry in the Pacific Northwest. Located in the Gifford Pinchot National Forest in southwest Washington, the forest is a nexus of groundbreaking discoveries in forest genetics and ecology, and is one of more than seventyfive Forest Service landscapes across the U.S. devoted to forest and range research. Forest of Time follows one hundred years of forest science at Wind River, as social and scientific changes transformed the twentieth century and the Pacific Northwest forest itself. The Forest Service began research at Wind River in 1908 to learn the secrets of the giant Douglas fir. During the course of the century, generations of scientists studied the forest from different angles, and their conclusions changed through time. Initially, Wind River scientists saw the region in need of protec tion from fire and careless logging. They saw scorched, cutover land that required replanting. Later they saw the forest in need of improvement, needing to be freed from pests and unprofitable s pecies and replaced with thrifty, fastgrowing plantations. Wind River soon became a laboratory where foresters from around the world came to learn how to grow the best possible lumber in the shortest amount of time. As plantations replaced natural forest stands, scientists came to Wind River to explore the complexity of oldgrowth forest ecosystems. And today, Wind River is the center of a twentyfirst century exploration of forest canopies and the global connec tion between forests and atmos phere. In Forest of Time, Margaret Herring and Sarah Greene show readers how science grows and changes in unexpec ted ways, much like a forest through time. It is a story of discovery and blindness, of opportunities taken and missed, in a forest dedicated to longterm research. illustrations