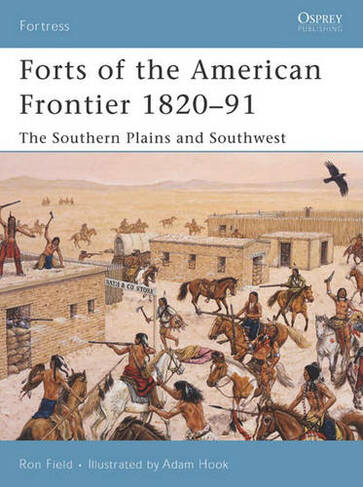 Forts of the American Frontier 1820-91: The Southern Plains and Southwest (Fortress No. 54)

During the 1840s, the rarely visited Great American Desert of the Southern Plains and Southwest became part of the inexorable westward expansion, as European traders and settlers headed overland from the eastern seaboard. The traditional lands of the Creek, Cherokee, Choctaw, Chickasaw and Seminole Indians were quickly absorbed, and the rapid advance of the frontier soon brought the white man into conflict with the Kiowa, Comanche, Apache and Navajo tribes. Numerous posts and forts were built to protect trading posts and settlers, and to police the Indian reservations. This title explores the design and development of these sites, the life of the garrisons that manned them, and the clashes with Native American warriors such as Geronimo, Manuelito and Quanah Parker. Illustrations (some col.)

Ron Field was born in Hertford, England, in 1943 and was educated in Cheltenham where he gained a Bachelor of Education (Hons) degree. He has taught history in the Cotswolds since 1973, and is presently Head of History at the Cotswold School in Bourton-on-the-Water. He was awarded the Fulbright Scholarship in 1982 and taught history at Piedmont High School in California from 1982-83 as part of the UK/US Teacher Exchange Programme. He has traveled extensively in the US conducting research at numerous libraries, archives and museums. The author lives in Bourton-on-the-Water, England.