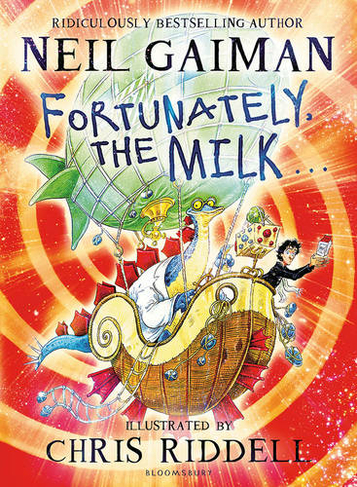 By Neil Gaiman (Author), Chris Riddell (Illustrator)
Paperback
https://www.whsmith.co.uk/products/fortunately-the-milk---/neil-gaiman/chris-riddell/paperback/9781408841792-12-000.html £5.94 rrp £6.99 Save £1.05 (15%)
GBP
Availability
In Stock
Free Delivery Available When You Spend £25 Or More
Details
Spend £25 On Products To Receive Free Standard Delivery To Your Home Or Free Next Working Day Click And Collect To Store

Also available on eBook for £5.39. Click here to purchase from Rakuten Kobo

From multi-award-winning Neil Gaiman comes a spectacularly silly, mind-bendingly clever, brilliantly bonkers adventure - with lip-smackingly gorgeous illustrations by Chris Riddell. Mum's away. Dad's in charge. There's no milk. So Dad saves the day by going to buy some. Really, that's all that happens. Very boring. YAAAAAAAAAWN. There are absolutely none of the following inside: GLOBBY GREEN ALIENS! INTERGALACTIC POLICE! PIRATES! And most definitely NOT a time-travelling hot-air balloon piloted by the brilliant Professor Steg ... Don't miss this gloriously entertaining novel about time-travel, dinosaurs, milk and dads.

Neil Gaiman has written highly acclaimed books for both children and adults and is the first author to have won both the Carnegie and Newbery Medals for the same work - The Graveyard Book. Many of his books, including Coraline and Stardust, have been made into films; Neverwhere has been adapted for TV and radio; and American Gods and Good Omens have been adapted into major TV series. He has also written two episodes of Doctor Who and appeared in The Simpsons as himself. Chris Riddell is a much loved illustrator and acclaimed political cartoonist. He has won the Costa Children's Book Award, the Nestle Gold Award is the only artist to have won the Kate Greenaway Medal three times, most recently for his illustrations in The Sleeper and the Spindle. He was Waterstones Children's Laureate from 2015 to 2017 and has illustrated the work of many celebrated children's authors, including five Neil Gaiman titles and J.K. Rowling's The Tales of Beedle the Bard. He is the author of the bestselling Goth Girl and Ottoline series and co-creator of The Edge Chronicles.