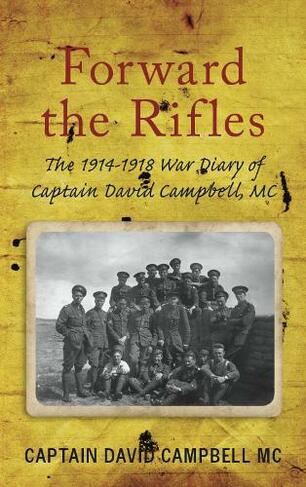 The battlefields of Gallipoli and Salonica were a far cry from life on a small working farm in County Louth, Ireland, and yet, in 1915, Captain David Campbell, M.C., 6th Royal Irish Rifles, found himself in the searing Turkish heat, confronted by a faceless and seemingly tireless enemy. Less than twenty months after joining the Officers' Training Corps in Trinity College Dublin, Campbell led his company over the arid ground to the Front. From the beginning he kept a diary, describing life in these two theatres of war in great detail. Forward the Rifles is that diary. In it, he encapsulates the frightening scale of warfare, and yet he managed to find humour in the simple acts of himself and his men, as they trudge through daily life, trying to keep their bodies nourished and their spirits buoyed. The story of Captain David Campbell is one that will ring true for many, and yet it is an intensely personal one, chronicling his recovery from the physical and mental wounds of battle. Now, more than three decades after his death, the unswerving loyalty, courage and kindness of Captain David Campbell, M.C., are reborn.