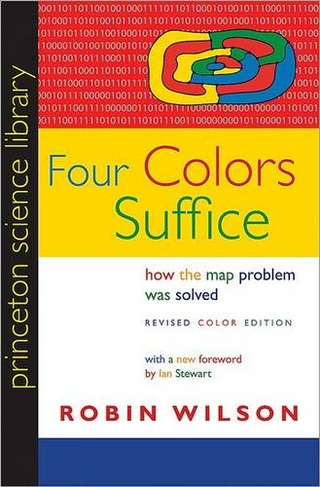 On October 23, 1852, Professor Augustus De Morgan wrote a letter to a colleague, unaware that he was launching one of the most famous mathematical conundrums in history--one that would confound thousands of puzzlers for more than a century. This is the amazing story of how the "map problem" was solved. The problem posed in the letter came from a former student: What is the least possible number of colors needed to fill in any map (real or invented) so that neighboring counties are always colored differently? This deceptively simple question was of minimal interest to cartographers, who saw little need to limit how many colors they used. But the problem set off a frenzy among professional mathematicians and amateur problem solvers, among them Lewis Carroll, an astronomer, a botanist, an obsessive golfer, the Bishop of London, a man who set his watch only once a year, a California traffic cop, and a bridegroom who spent his honeymoon coloring maps. In their pursuit of the solution, mathematicians painted maps on doughnuts and horseshoes and played with patterned soccer balls and the great rhombicuboctahedron. It would be more than one hundred years (and countless colored maps) later before the result was finally established. Even then, difficult questions remained, and the intricate solution--which involved no fewer than 1,200 hours of computer time--was greeted with as much dismay as enthusiasm. Providing a clear and elegant explanation of the problem and the proof, Robin Wilson tells how a seemingly innocuous question baffled great minds and stimulated exciting mathematics with far-flung applications. This is the entertaining story of those who failed to prove, and those who ultimately did prove, that four colors do indeed suffice to color any map. This new edition features many color illustrations. It also includes a new foreword by Ian Stewart on the importance of the map problem and how it was solved. 2 Maps

Robin Wilson is emeritus professor of pure mathematics at the Open University and emeritus professor of geometry at Gresham College, London. He has written and edited many books on topics ranging from graph theory and combinatorics, via sudoku, philately, and the Gilbert and Sullivan operas, to the history of mathematics. He is currently president of the British Society for the History of Mathematics.