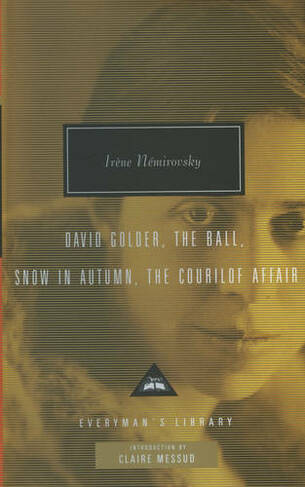 Readers everywhere were introduced to the work of Irene Nemirovsky through the publication of her long-lost masterpiece, Suite Francaise. But Suite Francaise was only a coda to the brief yet remarkably prolific career of this nearly forgotten, yet hugely talented novelist, who fled Russia for Paris after the Revolution and died at Auschwitz at the age of 39. Here in one volume are four of Nemirovsky's other novels - all of them newly translated by the award-winning Sandra Smith, and all, except David Golder, available in English for the first time. David Golder is the book that established Nemirovsky's reputation in France in 1929 when she was twenty-six. It is a novel about greed and loneliness, the story of an ageing Russian Jewish businessman,an exile in France, learning to confront death and the knowledge that wealth has not brought him happiness. The Ball is both a sensitive exploration of adolescenceand a mercilessexposure of bourgeois social pretension. Snow in Autumn is an evocative tale of White Russian emigres in Paris, while in The Courilof Affair a retired Russian revolutionary recalls an infamous assassinationcommitted in his youth. Introduced by novelist Claire Messud. none

Irene Nemirovsky was born in Kiev in 1903, the daughter of a successful Jewish banker. In 1918 her family fled the Russian Revolution for France where she became a bestselling novelist, author of David Golder, All Our Worldly Goods, The Dogs and the Wolves and other works published in her lifetime or soon after, such as the posthumously published Suite Francaise and Fire in the Blood. She was prevented from publishing when the Germans occupied France and moved with her husband and two small daughters from Paris to the safety of the small village of Issy-l'Eveque (in German occupied territory). It was here that Irene began writing Suite Francaise. She died in Auschwitz in 1942.