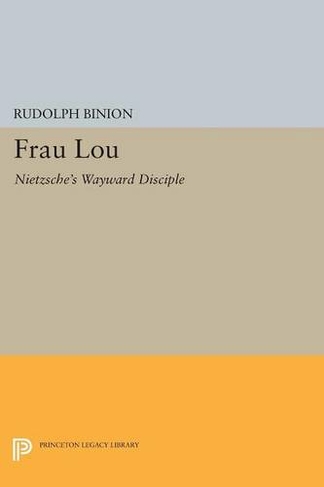 The rich and fascinating life of Lou Andreas-Salome (1861-1937) has been reconstructed by Professor Binion on a vast documentary basis, and his findings contradict all earlier versions of her life. Frau Lou was a woman of prodigious intellect, a woman of letters, and a powerful personality. She was closely linked with many of the great cultural figures of the time, often before they achieved recognition. This was the case with Nietzsche, Rilke, Freud, Ferdinand Tonnies, Gerhart Hauptmann, Arthur Schnitzler, and Martin Buber. Frau Lou not only relates but interprets Lou's life, and the point of the book is to discover how the works of the mind, whether scientific or imaginative, arise out of personal experience. Contents: I. Father and Father-God. II. God's Vicar, Gillot. III. After Gillot. IV. The Unholy Trinity. V. From Pillar to Post. VI. "A Pity Forever." VII. Lou Without Nietzsche. VIII. The Wayward Disciple. IX. Rites of Love. X. Super-Lou and Raincr. XI. Russia In, Raincr Out. XII. Idly Busy. XIII. At Freud's Elbow. XIV. A Personalized Freudianism. XV. Theorizing for Freud. XVI. Living for Freud. XVII. Aside from Freud. XVIII. Revamping the Past. XIX. "Homecoming." XX. A Retrospect. XXI. Beyond Frau Lou. Bibliography. Index. Originally published in 1968. The Princeton Legacy Library uses the latest print-on-demand technology to again make available previously out-of-print books from the distinguished backlist of Princeton University Press. These editions preserve the original texts of these important books while presenting them in durable paperback and hardcover editions. The goal of the Princeton Legacy Library is to vastly increase access to the rich scholarly heritage found in the thousands of books published by Princeton University Press since its founding in 1905.