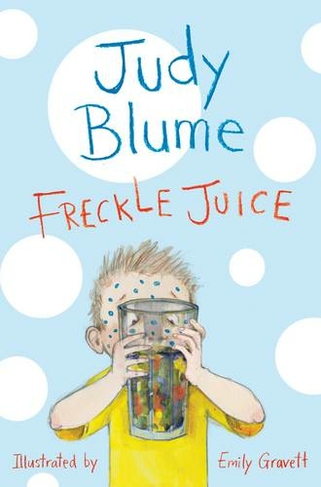 Andrew wants freckles. He wants to be like Nicky Lane, who has millions of them. If he had freckles like Nicky, then his mother would never notice when his neck was dirty. He wouldn't have to wash and he'd never be late for school. So when Andrew hears about the secret recipe for freckle juice, he's determined to try it . . . Freckle Juice is a humorous adventure for younger readers from literary superstar, Judy Blume, featuring inside illustrations by Kate Greenaway award-winning illustrator, Emily Gravett. EU Toy Safety Directive - No warning EU Toy Safety Directive - Carries minimum age warning

Judy Blume has been winning legions of fans around the world with her stories. More than eighty-two million copies of her books have been sold, and her work has been translated into thirty-two languages. She receives thousands of letters every month from readers of all ages who share their feelings and concerns with her. In addition to her hilarious Fudge books, Tales of a Fourth Grade Nothing, Otherwise Known as Sheila the Great, Superfudge, Fudge-a-Mania and Double Fudge, some of her incredibly popular books include The Pain and the Great One series and Freckle Juice. Judy lives in Key West, Florida, and New York City with her husband. Emily Gravett has won the Kate Greenaway Medal twice with her books Wolves and Little Mouse's Book of Fears. An author-illustrator of unique talent and skill, she has a host of popular and critically acclaimed titles to her name including Dogs, Wolf Won't Bite! and Again! And is the illustrator of Cave Baby, written by Julia Donaldson. Emily lives in Brighton with her family and pet dogs.