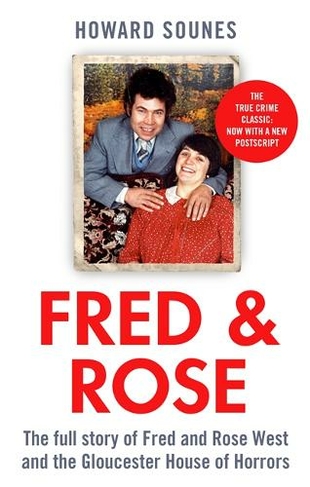 Fred & Rose: The Full Story of Fred and Rose West and the Gloucester House of Horrors

By Howard Sounes (Author)
Paperback
https://www.whsmith.co.uk/products/fred-and-rose-the-full-story-of-fred-and-rose-west-and-the-gloucester-house-of-horrors/howard-sounes/paperback/9780751577501-12-000.html £8.19 rrp £9.99 Save £1.80 (18%)
GBP
Availability
In Stock
Free Delivery Available When You Spend £25 Or More
Details
Spend £25 on eligible products to receive free standard delivery to home or free next working day click and collect to store
Share

AS FEATURED ON THE NEW PODCAST 'UNHEARD: THE FRED & ROSE WEST TAPES' FRED & ROSE IS THE DEFINITIVE ACCOUNT OF THIS INFAMOUS CASE - NOW UPDATED WITH A POSTSCRIPT FROM THE AUTHOR Fred and Rose West are virtually unique in British criminal history: a husband and wife who loved and killed together. During their long relationship, the Wests murdered a series of young women, burying the remains of nine victims under their home at 25 Cromwell Street, Gloucester, including those of their daughter. What was left of Fred West's eight-year-old stepdaughter was dug up from under the Wests' previous Gloucester home; his first wife and nanny were buried in open country. Most victims had been decapitated and dismembered, their remains showing signs of sexual torture. These twelve are just the ones police found when the Wests were arrested in 1994. There may be more whose bones have not been located . . . Howard Sounes broke the first major story about the Wests as a journalist, and covered the murder trial of Rosemary West, before writing Fred & Rose, the definitive account of this infamous case. Beginning with Fred's and Rose's bizarre childhoods, Sounes charts their lives and crimes in forensic detail, creating a fascinating and truly frightening account of a marriage soaked in blood.

Born in London in 1965, Howard Sounes spent the early part of his career as a newspaper journalist. In 1994, while working for the Sunday Mirror, he broke major stories in the West murder case, then covered the case up to and including Rosemary West's trial. This book, Fred & Rose, was first published in 1995, following Mrs West's conviction. A bestseller, it has remained in print ever since. Following the success of Fred & Rose, Howard Sounes left newspaper journalism to write books full-time, and is now published in twenty-two languages around the world. He is the author of biographies of Bob Dylan (Down the Highway), Lou Reed (Notes from the Velvet Underground) and the American writer Charles Bukowski (Locked in the Arms of a Crazy Life). He has written one other true crime book, Heist: The True Story of the World's Biggest Cash Robbery.