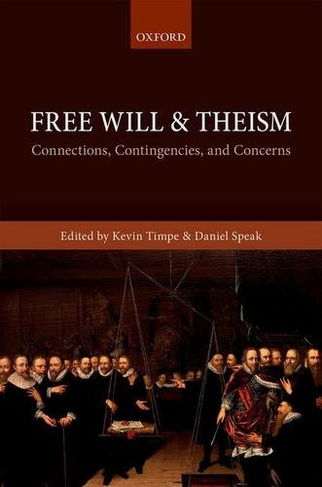 Free Will and Theism: Connections, Contingencies, and Concerns

Concerns both about the nature of free will and about the credibility of theistic belief and commitment have long preoccupied philosophers. In addition, there can be no denying that the history of philosophical inquiry into these two issues has been dynamic and, at least to some degree, integrated. In a great many cases, classical treatments of one have influenced classical treatments of the other-and in a variety of ways. Without pretending to be able to trace all the historical integrations of these treatments, there is no real question that these philosophical interrelations exist and are worthy of further exploration. In addition, contemporary discussions contain more than a few hints of suspicion that theistic belief is adversely affecting the purity of inquiry into contours of human free will. Nevertheless, until now there has been no volume systematically exploring the relationship between religious beliefs and various accounts of free will in the contemporary domain. With a particular eye on how the former might be-either legitimately or illegitimately-affecting the latter, this collection fills an important gap in the current debate. Here, sixteen leading philosophers focus their attention on a crucial point of intellectual intersection, with surprising and illuminating results.

Kevin Timpe is William Harry Jellema Chair in Christian Philosophy at Calvin College, and a former Templeton Research Fellow at St. Peter's College, Oxford University. His research is focused on the metaphysics of free will and moral responsibility, virtue ethics, philosophy of disability, and issues in the philosophy of religion. He is the author of Free Will: Sourcehood and its Alternatives, 2nd edn (Bloomsbury, 2012) and Free Will in PhilosophicalTheology (Bloomsbury, 2013). He has edited a number of volumes, including Virtues and Their Vices (OUP, 2014) and Arguing about Religion (Routledge, 2009). He is currently working (with Meghan Griffith and Neil Levy) on The Routledge Companion to Free Will. Daniel Speak is Associate Professor of Philosophy at Loyola Marymount University. He has recently served as a Visiting Research Fellow at Biola University's Center for Christian Thought and as a Senior Fellow at the Center for Philosophy of Religion at Rutgers University. He thinks and writes principally about the metaphysics, ethics, and epistemology of free will and about related issues in the philosophy of religion. His articles have appeared in The Philosophical Quarterly,Faith and Philosophy, and The Oxford Handbook of Free Will, among others.