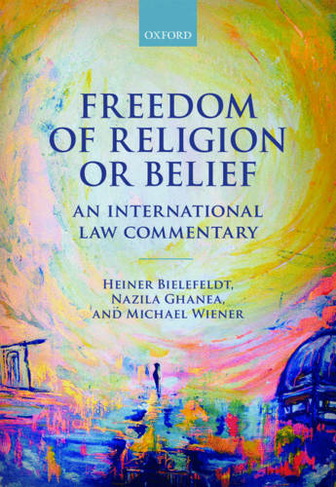 Freedom of Religion or Belief: An International Law Commentary

Dr Heiner Bielefeldt (Dr phil Tubingen, Habil Bremen, Dr h.c. Luzern) was the United Nations Special Rapporteur on freedom of religion or belief from 2010 to 2016. He is Professor of Human Rights and Human Rights Politics at the University of Erlangen-Nurnberg. From 2003 to 2009, he was Director of Germany's National Human Rights Institution. His research interests include the history of political ideas, legal philosophy and various interdisciplinary facetsof human rights theory and practice, with a specific focus on freedom of religion or belief.Dr Nazila Ghanea (MA Leeds, PhD Keele, MA Oxon) is Associate Professor in International Human Rights Law at the University of Oxford, Fellow of Kellogg College and member of the OSCE Panel of Experts on Freedom of Religion or Belief. She serves on the Board of Trustees of the independent think tank the Universal Rights Group. Her research has been funded by the UK Arts and Humanities Research Board, the UK Economic and Social Research Council, Open Society and QNRF. Her research interestsinclude freedom of religion or belief, freedom of expression, minority rights, the domestic effects of human rights treaty ratification and human rights in the Middle East.Dr Michael Wiener (LLM London, Ass iur Rheinland-Pfalz, Dr iur Trier) has been working in the Office of the UN High Commissioner for Human Rights since 2006. He wrote his doctoral thesis on the mandate of the Special Rapporteur on freedom of religion or belief and has subsequently assisted the mandate for five years, conducting visits to a dozen of countries/territories. He has also been a Visiting Fellow of Kellogg College at the University of Oxford since 2011. He has published a book onfreedom of religion or belief as well as related chapters and journal articles.