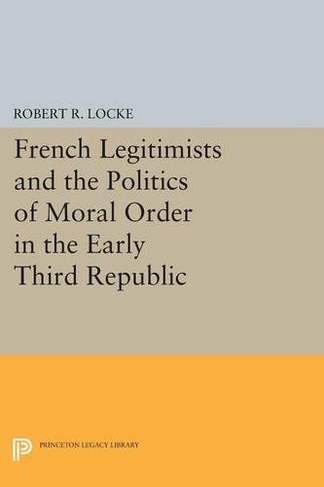 Traditionally, the legitimists of early Third Republican Prance have been dismissed as historical anachronisms. To arrive at a fuller understanding of these men, Robert R. Locke has used French public archives, libraries, and previously ignored private sources to investigate the divine right monarchists and the nature of their protest. Professor Locke concentrates on two hundred legitimists in the National Assembly of 1871. He identifies the legitimists socially and occupationally, and evaluates their response to such problems of modernization as industrialization, urbanization, bureaucratization. and democratization. The author analyzes legitimist ideas within the context of the immediate historical situation, and contrasts the social-economic background and mentality of the legitimists with that of other French and European monarchists. Far from being anachronisms, the legitimists of Professor Locke's study emerge as men of diverse social-economic origins who frequently accepted economic change and innovation--men who wanted to restore the old monarchy, but not necessarily the old regime. Their characteristics, the author shows, have an affinity with those of all groups who try to uphold traditional beliefs in a changing world. Originally published in 1974. The Princeton Legacy Library uses the latest print-on-demand technology to again make available previously out-of-print books from the distinguished backlist of Princeton University Press. These editions preserve the original texts of these important books while presenting them in durable paperback and hardcover editions. The goal of the Princeton Legacy Library is to vastly increase access to the rich scholarly heritage found in the thousands of books published by Princeton University Press since its founding in 1905.