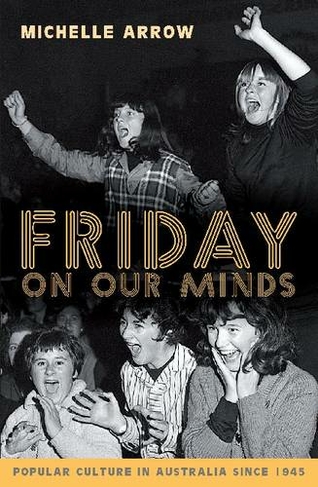 Friday on Our Minds

From jitterbugging to ""Big Brother"", from the introduction of television to the rise of file-sharing, ""Friday on our Minds"" explores the ways popular culture has developed and changed in Australia. This book considers film, television, sport, music and leisure in relation to each other, rather than as stand-alone cultural forms. The book also pays significant attention to issues of consumption and audience engagement with popular culture through case studies. It is written by an award-winning author who was a presenter on the ABC TV history series ""Rewind"". In order to understand the massive social and cultural changes that took place in Australia since the end of World War II, Michelle Arrow examines popular culture through three main lenses: consumerism and the development of a mass consumer society; the impact of technological change; and, the ways that popular culture contributes to, and articulates, individual and collective identities. She provides an integrated account of changes in a range of popular culture forms, meanings, production and consumption.

Michelle Arrow is a senior lecturer in history at Macquarie University with a longstanding interest in the intersections between history and popular culture. She previously held the University of New South Wales history fellowship and was a presenter on the television history series "Rewind." She is the author of "Upstaged."

Friday on Our Minds
Friday on Our Minds
Michelle Arrow
Paperback
Special Order item not currently available. We'll try and order for you
https://www.whsmith.co.uk/products/friday-on-our-minds/michelle-arrow/paperback/9780868406626.html £22.50
GBP