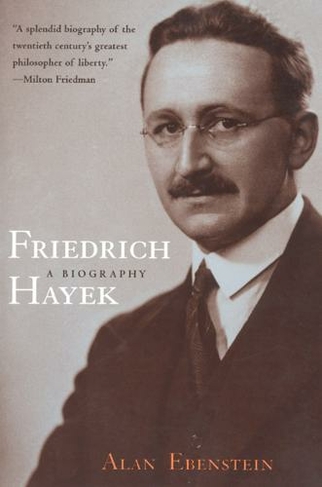 The once commonly held idea that central direction of the economy by the government is a more efficient and fair method to allocate resources than a free market is now almost universally discredited, in no small part due to the works of Friedrich Hayek (1899-1992). In the first full biography of this visionary thinker, Alan Ebenstein chronicles Hayek's life, works and legacy from his early years in fin-de-siecle Vienna to his career as a Nobel Prize-winning economist, political philosopher and leading public intellectual. Providing in-depth, critical and accessible accounts of Hayek's major works and how they came to be written, Ebenstein gives us a much richer understanding of the personal, historical and intellectual circumstances surrounding such classics as "The Road to Serfdom", "Law, Legislation and Liberty" and "The Fatal Conceit". In so doing he sheds new light on Hayek's risky, often lonely, but ultimately triumphant struggle to alert the world to the economic and political dangers of classical socialism and the virtues of free markets, free ideas and free societies. 1 halftone

Alan Ebenstein is the author or coauthor of six other books in the history of economic and political theory, including Edwin Cannan: Liberal Doyen; with his father, the late William Ebenstein, Great Political Thinkers: Plato to the Present; and the forthcoming Hayek's Journey. Ebenstein received his Ph.D. in political philosophy from the London School of Economics and resides in Santa Barbara, California.