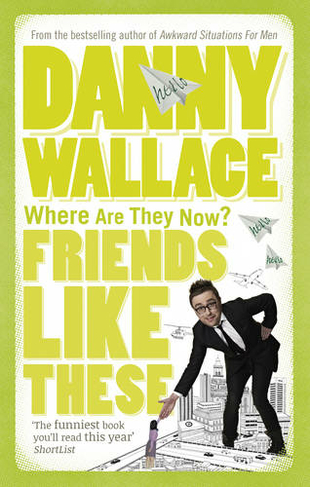 Danny Wallace is about to turn thirty and his life has become a cliche. Recently married and living in a smart new area of town, he's swapped pints down the pub for lattes and brunch. For the first time in his life, he's feeling, well ... grown-up. But something's not right. Something's missing. Until he finds an old address book containing just twelve names. His best mates as a kid. Where are they now? Who are they now? And how are they coping with being grown-up too? And so begins a journey from A-Z, tracking down and meeting his old gang. He travels from Berlin to Tokyo, from Sydney to LA. He even goes to Loughborough. He meets Fijian chiefs. German rappers. Some ninjas. And a carvery manager who's managed to solve time travel. But how will they respond to a man they haven't seen in twenty years, turning up and asking if they're coming out to play? Part-comedy, part-travelogue, part-memoir, Friends Like These is the story of what can happen when you track down your past, and of where the friendships you thought you'd outgrown can take you today...

Danny Wallace is a writer and television presenter, who wears glasses and used to have a cat. His first solo book, Join Me, was described as a 'word-of-mouth phenomenon' by The Bookseller and 'one of the funniest stories you will ever read' by the Daily Mail. His second book, Yes Man - in which he decided to say 'Yes' to everything has been made into a film starring Jim Carrey. It was described as 'hilarious' by more than four national newspapers, and Richard Madeley. Both books were Sunday Times bestsellers. Danny Wallace is PPA's Columnist of the Year 2011. Find out more about Danny at www.dannywallace.com.

Friends Like These
Friends Like These
Danny Wallace
Paperback
Special Order item not currently available. We'll try and order for you
https://www.whsmith.co.uk/products/friends-like-these/danny-wallace/paperback/9780091896775.html £12.87 rrp £13.99 Save £1.12 (8%)
GBP