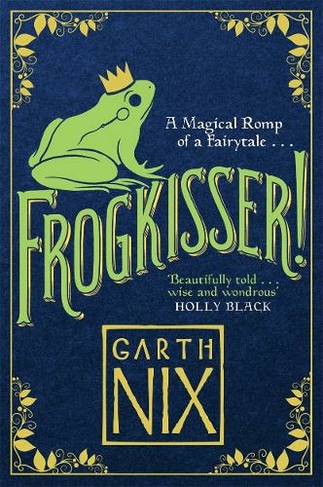 Frogkisser!: A Magical Romp of a Fairytale

'Wise and wondrous' - Holly Black Garth Nix is on hilarious form as he spins his very own fairy tale, featuring Princess Anya, who, with her loyal dog, must embark on a terribly important (capital Q) Quest to acquire the ingredients for a reversal lip balm, the vital item needed to change a frog back to a prince . . . oh, and save her kingdom from her villainous step(step)father. Winner of the Mythopoeic Fantasy Award for Children's Literature, 2018 A brilliantly funny take on fairytales and quests for younger readers. p.p1 {margin: 0.0px 0.0px 0.0px 0.0px; font: 13.0px Georgia; color: #232323; -webkit-text-stroke: #232323} span.s1 {font-kerning: none}

Garth Nix was born in 1963 in Melbourne, Australia. A full-time writer since 2001, he has worked as a literary agent, marketing consultant, book editor, book publicist, book sales representative, bookseller, and as a part-time soldier in the Australian Army Reserve. Garth's books include the award-winning Old Kingdom fantasy novels; the six books of The Seventh Tower sequence; The Keys to the Kingdom series; and with Sean Williams, the Troubletwisters books and Spirit Animals: Blood Ties. He is also the author of Frogkisser and other novels for younger children.More than six million copies of Garth's books have been sold around the world, his books have appeared on the bestseller lists of the New York Times, Publishers Weekly, and the Guardian, and his work has been translated into 40 languages. He lives in Sydney, Australia. Follow Garth on twitter at @garthnix or at www.garthnix.com