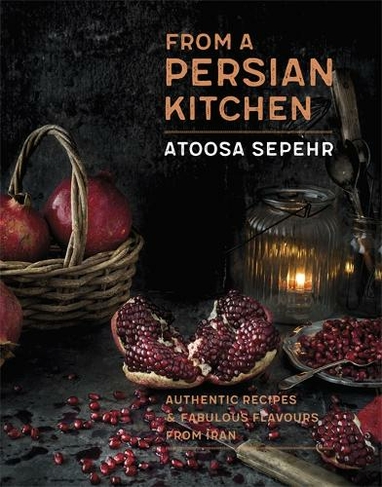 From a Persian Kitchen Authentic recipes and fabulous flavours from Iran

An Irish Times Best Food Book of the Year. 'A dream of a cookery book. Sumptuous, tempting with quite beautiful photography.' Irish Examiner 'The book is so beautiful, full of [your] own photographs, that look like gorgeous still life paintings.' Suzy Kline, BBC R4 Saturday Live 'The best kind of cookbook are those that you make you want to scribble and make every dish.' The Hampstead Kitchen 'A menu of Middle Eastern gems to tempt the taste buds' Sunday Express Gourmand World Cookbook 2019 award finalist Author and photographer Atoosa Sepehr offers not just mouthwatering traditional Iranian recipes, but also her own sumptuous photographs of both her food and the people and landsapes of Iran. Born and brought up in Iran, Atoosa came to work in the UK in 2007, but she never left behind the wonderful flavours of her family and childhood. Cooking these dishes for her family and friends over here has given her the passion to share the authentic, home cooked Persian cuisine with an international readership. The book contains traditional recipes handed down the generations, but converted to fit into Atoosa's busy life. They are delicious and easy to prepare, using ingredients you can get in any supermarket. 'Every time I cook a Persian dish, I feel connected to this long and varied history, knowing that despite changing geographical and political boundaries, Persian cuisine has survived and thrived, bringing people together, sharing and celebrating.' Atoosa Atoosa's Persian Kitchen is an impressively practical recipe book, but it is a photographic celebration of an entire country, too. 100-150 integrated colour illustrations

Atoosa was born in the Iranian city of Shiraz in 1977. She grew up in Iran and studied at Azad University of Tabriz. Having completed her degree in 2000, she moved to Tehran where she worked as a computer programmer for Iritec Company. In 2001, she moved to London to learn English, and also worked as a web designer. She returned to Iran in 2003 to work in the stock market in Tehran in order to learn about business processes before studying for an MBA, which she completed in 2005. Atoosa was inspired to start her own company in the Import and Export field and became the Iranian representative for one of the biggest Iranian steel companies in London. This led to her moving back to London in 2007. She decided to devote more time to her passions of photography and food. She became Food Editor of Classic Magazine, and then decided to fulfil her lifetime ambition to create a Persian cookbook, which has allowed her to focus more on her creativity, and love of food, art and photography. Her website is http://www.atoosasepehr.com/about/