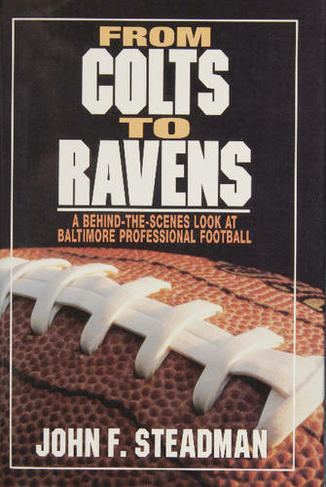 From Colts to Ravens: A Behind-the-Scenes Look at Baltimore Professional Football

Step into the locker rooms, the playing fields, and the owners' offices with sportswriter John F. Steadman as he relates the fascinating tale of football in Baltimore. In scores of animated first-person accounts, the author tells it like it was: from the organization of the Colts in 1947, through the sale of the team to Bob Irsay in 1972, to the infamous trip out of the town under the cover of darkness in 1984, and finally the acquisition of a new Baltimore team, the Ravens, in 1996. Included in the telling are the player heroes-Unitas, Donovan, Moore, Berry, and others-as well as the coaches, general managers, and owners. Among the cast of characters were con men, real scoundrels, and not a few bizarre figures. Some had good intentions; others were inept; still others were devious. The story is spiced with pungent comments from a man who was there-first as a fan watching the inaugural game in 1947 and later as a professional reporting the championship moments, the demise in 1984, and the ensuing struggle to return to the league. 68 b/w photos & 3 illustrations