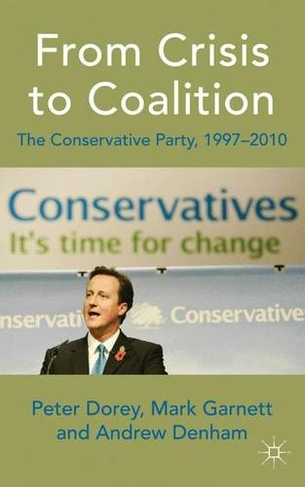 In 2010 the Conservative Party returned to office after over a decade of largely ineffective opposition to New Labour. This book explains why it took so long to recover, and why the party was unable to win an overall majority despite the charismatic leadership of David Cameron. It covers all aspects of Conservative Party politics since 1997. VII, 216 p.

PETER DOREY is Reader in British Politics at Cardiff University, UK. He has published extensively on aspects of the Conservative Party and his twelve books include The Conservative Party and the Trade Unions (1995), The Major Premiership (Editor, Palgrave Macmillan, 1999), British Conservatism and Trade Unionism, 1945-1964 (2009) and British Conservatism: The Politics and Philosophy of Inequality (2011). MARK GARNETT is Lecturer in Politics and International Relations at Lancaster University, UK. He is the author of several books on British Politics, including Exploring British Politics (3rd edition forthcoming, 2011), Whatever Happened to the Tories? (with Ian Gilmour, 1997), and Splendid! Splendid! The Authorized Biography of Willie Whitelaw (2002). ANDREW DENHAM is Reader in Government at the University of Nottingham, UK. He has written and published extensively on Conservative Party politics in the UK. His previous books include Think Tanks of the New Right (1996), Keith Joseph (co-authored with Mark Garnett, 2001) and Democratising Conservative Leadership Selection: From Grey Suits to Grass Roots (co-authored with Kieron O'Hara, 2008).