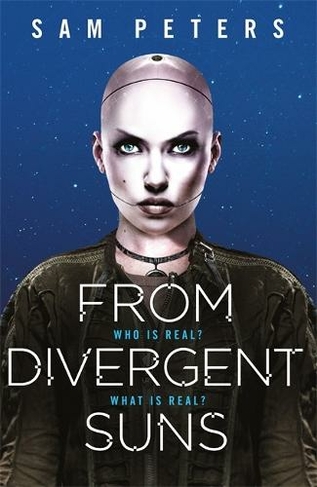 By Sam Peters (Author)
Paperback
https://www.whsmith.co.uk/products/from-divergent-suns-book-3/sam-peters/paperback/9781473214828-12-000.html £9.01 rrp £10.99 Save £1.98 (18%)
GBP
Availability
In Stock
Free Delivery Available When You Spend £25 Or More
Details
Spend £25 on eligible products to receive free standard delivery to home or free next working day click and collect to store
Share

The thrilling conclusion to the brilliant trilogy set on a distant world among the stars. A MISSING NUCLEAR WARHEAD. AN INTERSTELLAR CONSPIRACY. A DOOMSDAY CULT. In a remote city, a renowned performance artist commits suicide on video; from a long-abandoned space station comes impossible footage of a dead body; and in an isolated outpost, a secretive cult believes they are communing with the ancient alien Masters. How are they connected? Inspector Keon is trying to investigate, but once again his life has been flipped upside down. His wife, Alysha, is alive. His long search is over. Or, so he thinks. But his investigation is leading to a grand conspiracy by a powerful cabal and the forces of distant Earth reaching into every level of Magentan society. Is she involved? As he tries to learn the truth, the AI construct of his wife he created searches for her own place in this world and Magenta faces an existential threat. On the run, and with nowhere to turn Keon must decide who to trust: The wife he loves or the AI who loves him.

Sam Peters is a mathematician, part-time gentle-person adventurer and occasional screenwriter who has seen faces glaze over at the words 'science fiction' once too often. Inspirations include Dennis Potter, Mary Doria Russell, Lynda La Plante, Neal Stephenson, and Bill and Ted's Excellent Adventure. Has more hopes than regrets, more cats than children, watches a lot of violent contact sport and is an unrepentant closet goth.