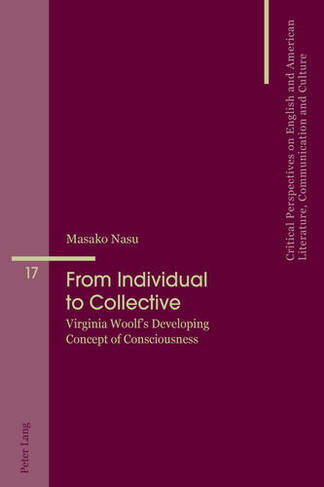 This book argues that a profound shift can be found in the works of Virginia Woolf, from an early "pursuit of the individual" to a late "pursuit of the collective". Evidence for this shift is found both in the narrative modes she employed and the methods by which thought is represented in the works themselves, and in ideas and ruminations found in Woolf's diaries and essays. The stylistic analysis covers works from The Voyage Out (1915) to the posthumously published Between the Acts (1941), and shows how several of the shorter pieces can be considered to be experiments with techniques that were fully employed in Woolf's longer, major fictions. This shift arises from changes in Woolf's concept of the conscious and unconscious over time, and the argument shows how she took deliberate steps to reflect these changes in her fiction. This framework provides key insights for new interpretations of her works.

Masako Nasu is an associate professor at Okayama University, Japan. Her main research fields are the study of modernist fiction and English stylistics. Her recent publications include: "The role of literature in foreign language learning" (in Literature and Language Learning in the EFL Classroom, 2015) and "Literature and the role of background knowledge for EFL learners" (in Scientific Approaches to Literature in Learning Environments, 2016).