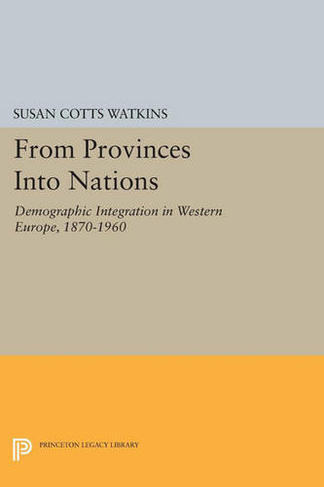 From Provinces into Nations Demographic Integration in Western Europe, 1870-1960

Between 1870 and 1960, national boundaries became more evident on the demographic map of Western Europe. In most of the fifteen countries examined here, differences in marital fertility, illegitimacy, and marriage from one province (counties, cantons, arrondissements) to another diminished considerably. From Provinces into Nations describes this shift to greater national demographic homogeneity and places it in the context of a parallel decline in linguistic diversity, as well as in the context of increases in national market integration, the expansion of state activities, and nation-building. The book interprets the shift as evidence of the influence of communities on demographic behavior, and as an indication of the growing predominance of national over local communities. The author uses demographic data, too often the property of specialists, to examine themes of interest to historians, sociologists, economists, and political scientists interested in the integration of modern societies. Originally published in 1990. The Princeton Legacy Library uses the latest print-on-demand technology to again make available previously out-of-print books from the distinguished backlist of Princeton University Press. These editions preserve the original texts of these important books while presenting them in durable paperback and hardcover editions. The goal of the Princeton Legacy Library is to vastly increase access to the rich scholarly heritage found in the thousands of books published by Princeton University Press since its founding in 1905.