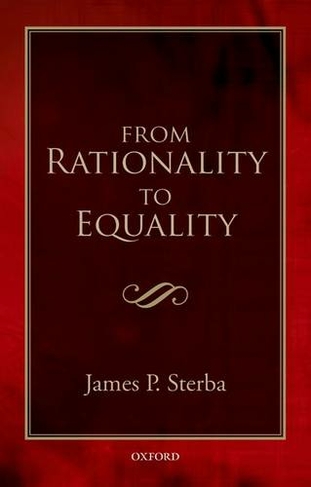 From Rationality to Equality

Most contemporary moral and political philosophers would like to have an argument showing that morality is rationally required. In From Rationality to Equality, James P. Sterba provides just such an argument and further shows that morality, so justified, requires substantial equality. His argument from rationality to morality is based on the principle of non-question-beggingness and has two forms. The first assumes that the egoist is willing to argue for egoism non-question-beggingly, and the second only assumes that the egoist is willing to assent to premises she actually needs to achieve her egoistic goals. Either way, he argues, morality is rationally (i.e., non-question-beggingly) preferable to egoism. Sterba's argument from morality to equality non-question-beggingly starts with assumptions that are acceptable from a libertarian perspective, the view that appears to endorse the least enforcement of morality, and then shows that this perspective requires a right to welfare which, when extended to distant peoples and future generations, leads to equality. He defends his two-part argument against recent critics, and shows how it is preferable not only to alternative attempts to justify morality, but also to alternative attempts to show that morality leads to a right to welfare and/or to equality.

James P. Sterba is Professor of Philosophy at the University of Notre Dame. His previous publications include Three Challenges to Ethics (OUP, 2001), The Triumph of Practice over Theory in Ethics (OUP, 2005), and Does Feminism Discriminate Against Men?-A Debate, with Warren Farrell (OUP, 2007). He is past president of the American Philosophical Association (Central Division) and several other organizations.