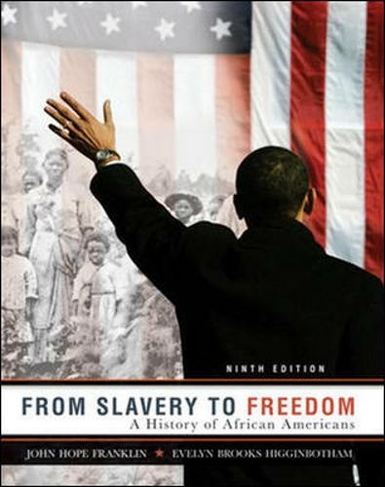 From Slavery to Freedom: (9th edition)

From Slavery to Freedom remains the most revered, respected, and honored text on the market. The preeminent history of African Americans, this best-selling text charts the journey of African Americans from their origins in Africa, through slavery in the Western Hemisphere, struggles for freedom in the West Indies, Latin America, and the United States, various migrations, and the continuing quest for racial equality. Building on John Hope Franklin's classic work, the ninth edition has been thoroughly rewritten by the award-winning scholar Evelyn Brooks Higginbotham. It includes new chapters and updated information based on the most current scholarship. With a new narrative that brings intellectual depth and fresh insight to a rich array of topics, the text features greater coverage of ancestral Africa, African American women, differing expressions of protest, local community activism, black internationalism, civil rights and black power, as well as the election of our first African American president in 2008. The text also has a fresh new 4-color design with new charts, maps, photographs, paintings, and illustrations. 57 Illustrations, unspecified

John Hope Franklin was the James B. Duke Professor Emeritus of History, and for seven years was Professor of Legal History at Duke University Law School. A native of Oklahoma and a graduate of Fisk University (1935), he received the A.M. and Ph.D. degrees in history from Harvard University (1936 and 1941). He taught at a number of institutions, including Fisk, St. Augustines College, and Howard University. In 1956 he went to Brooklyn College as Chair of the Department of History; and in 1964, he joined the faculty of the University of Chicago, serving as Chair of the Department of History from 1967 to 1970. At Chicago, he was the John Matthews Manly Distinguished Service Professor from 1969 to 1982, when he became Professor Emeritus. Among his many published works are The Free Negro in North Carolina (1943), Reconstruction after the Civil War (1961), A Southern Odyssey (1971), and perhaps his best-known book, From Slavery to Freedom: A History of African Americans, now in its ninth edition. In 1990 a collection of essays covering a teaching and writing career of fifty years was published as Race and History: Selected Essays, 1938-1988. At the time of his death in March 2009, he was engaged in research on "Dissidents on the Plantation: Runaway Slaves." During his long career, Professor Franklin was active in numerous professional and educational organizations. For many years he served on the editorial board of the Journal of Negro History. He also served as president of the following organizations: The Southern Historical Association, the United Chapters of Phi Beta Kappa, the Organization of American Historians, and the American Historical Association. Dr. Franklin served on many national commissions and delegations, including the National Council on the Humanities, the President's Advisory Commission on Ambassadorial Appointments, and the United States delegation to the 21st General Conference of UNESCO. He was appointed by President Clinton to chair the President's Advisory Board for the One America initiative in June 1997. He was the recipient of many honors. In 1978 Who's Who in America selected him as one of eight Americans who has made significant contributions to society. In 1995 he received the first W.E.B. DuBois Award from the Fisk University Alumni Association, the Organization of American Historians' Award for Outstanding Achievement, the NAACP's Spingarn medal, and the Presidential Medal of Freedom. In addition to his many awards, Dr. Franklin received honorary degrees from more than one hundred colleges and universities. Evelyn Brooks Higginbotham is the Victor S. Thomas Professor of History and of African and African American Studies at Harvard University. She is currently chair of the Department of African and African American Studies and has held this position since 2006. Professor Higginbotham earned a Ph.D. from the University of Rochester in American History, an M.A. from Howard University, and her B.A. from the University of Wisconsin-Milwaukee. Before coming to Harvard, she taught on the full-time faculties of Dartmouth, the University of Maryland, and the University of Pennsylvania. In addition, she was a Visiting Professor at Princeton University and New York University. Professor Higginbotham's writings span diverse fields--African American religious history, women's history, civil rights, constructions of racial and gender identity, electoral politics, and the intersection of theory and history. She is co-editor with Henry Louis Gates, Jr., of the African American National Biography (2008)--a multivolume-reference work that presents African American history through the lives of people. Professor Higginbotham is the author of Righteous Discontent: The Women's Movement in the Black Baptist Church: 1880-1920 (1993), which won numerous book prizes and was also included among The New York Times Book Review's Notable Books of the Year in 1993 and 1994. Dr. Higginbotham has received numerous awards. In Apri