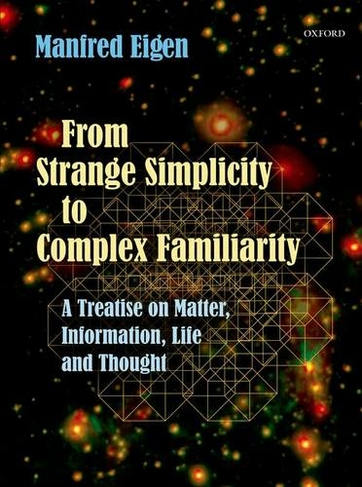 From Strange Simplicity to Complex Familiarity A Treatise on Matter, Information, Life and Thought

This book presents a vivid argument for the almost lost idea of a unity of all natural sciences. It starts with the "strange" physics of matter, including particle physics, atomic physics and quantum mechanics, cosmology, relativity and their consequences (Chapter I), and it continues by describing the properties of material systems that are best understood by statistical and phase-space concepts (Chapter II). These lead to entropy and to the classical picture of quantitative information, initially devoid of value and meaning (Chapter III). Finally, "information space" and dynamics within it are introduced as a basis for semantics (Chapter IV), leading to an exploration of life and thought as new problems in physics (Chapter V). Dynamic equations - again of a strange (but very general) nature - bring about the complex familiarity of the world we live in. Surprising new results in the life sciences open our eyes to the richness of physical thought, and they show us what can and what cannot be explained by a Darwinian approach. The abstract physical approach is applicable to the origins of life, of meaningful information and even of our universe. 265 line and halftone colour illustrations

Manfred Eigen was born in Bochum, Germany in 1927, and began his rerearch career at Gottingen in 1945. In 1967 he won the Nobel Prize for Chemistry for work on extremely fast chemical reactions. His work on chemistry, biochemistry and physics has been recognised throughout the world with honorary doctorates, prizes, and awards that include the Linus Pauling Medal (American Chemical Society, 1967), the Austrian Decoration for Arts and Sciences (1976), the FaradayMedal (Chemical Society, London, 1977), Max Planck Research Award (1994), the Lifetime Achievement Award of the Institute of Human Virology, Baltimore, USA (2005), and the Goethe Medal of the Goethe Society, Weimar (2007).