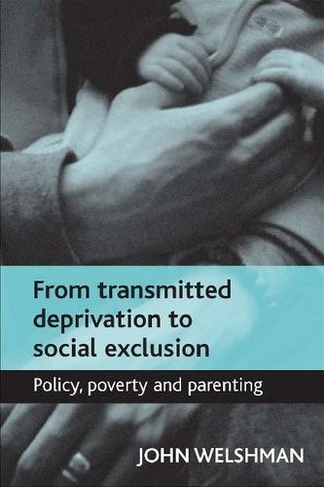 From Transmitted Deprivation to Social Exclusion Policy, Poverty, and Parenting

The book explores the content and background to Sir Keith Joseph's famous 'cycle of deprivation' speech in 1972, examining his own personality and family background, his concern with 'problem families', and the wider policy context of the early 1970s. With this background, the book explores New Labour's approach to child poverty, initiatives such as Sure Start, the influence of research on inter-generational continuities, and its stance on social exclusion. The author argues that, while earlier writers have acknowledged the intellectual debt that New Labour owed to Joseph, and noted similarities between their policy approaches to child poverty and earlier debates, more recent attempts to tackle social exclusion, by both the Labour and Coalition Governments, mean that these continuities are now more striking than ever before. With a new Preface for the paperback edition, From transmitted deprivation to social exclusion is the only book-length treatment of this important but neglected strand of the history of social policy. It will be of interest to students and researchers working on contemporary history, social policy, political science, public policy, sociology, and public health.