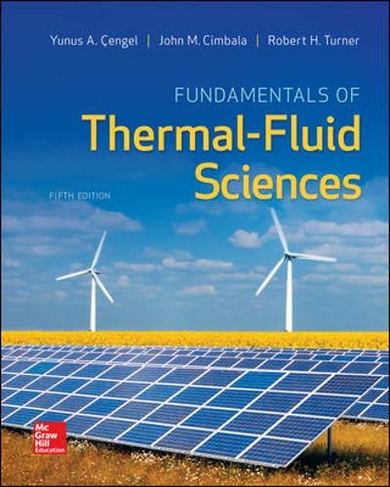 This book is intended for use as a textbook in a first course in thermal-fluid sciences for undergraduate engineering students in their junior or senior year, and as a reference book for practicing engineers. Students are assumed to have an adequate background in calculus, physics, and engineering mechanics. The objective of this text are to cover the basic principles of thermodynamics, fluid mechanics, and heat transfer. Diverse real-world engineering examples are presented to give students a feel for how thermal-fluid sciences are applied in engineering practice. By emphasizing the physics and physical arguments, students are able to develop intuitive understanding of thermal-fluid sciences. The text contains sufficient material to give instructors flexibility and to accommodate their preferences on the right blend of thermodynamics, fluid mechanics, and heat transfer for their students. By careful selection of topics, an instructor can spend one-third, one-half, or two-thirds of the course on thermodynamics and the rest on selected topics of fluid mechanics and heat transfer. The following supplements are now available: Student Resource DVD (Engineering Equation Solver---EES), Text Website---instructor and student resources, COSMOS (Complete Online Solutions Manual Organization System). Also available with the fifth edition is Connect. Connect is the only integrated learning system that empowers students by continuously adapting to deliver precisely what they need, when they need it, how they need it, so that your class time is more engaging and effective. 1687 Illustrations, unspecified

Yunus A. i?engel is Professor Emeritus of Mechanical Engineering at the University of Nevada, Reno. He received his B.S. in mechanical engineering from Istanbul Technical University and his M.S. and Ph.D. in mechanical engineering from North Carolina State University. His areas of interest are renewable energy, energy efficiency, energy policies, heat transfer enhancement, and engineering education. He served as the director of the Industrial Assessment Center (IAC) at the University of Nevada, Reno, from 1996 to 2000. He has led teams of engineering students to numerous manufacturing facilities in Northern Nevada and California to perform industrial assessments, and has prepared energy conservation, waste minimization, and productivity enhancement reports for them. He has also served as an advisor for various government organizations and corporations. Dr. i?engel is also the author or coauthor of the widely adopted textbooks Differential Equations for Engineers and Scientists (2013), Fundamentals of Thermal-Fluid Sciences (5th ed., 2017), Fluid Mechanics: Fundamentals and Applications (4th ed., 2018), Thermodynamics: An Engineering Approach (9th ed., 2019), and Heat and Mass Transfer: Fundamentals and Applications (6th ed., 2020), and all published by McGraw-Hill Education. Some of his textbooks have been translated into Chinese (Long and Short Forms), Japanese, Korean, Spanish, French, Portuguese, Italian, Turkish, Greek, Tai, and Basq. Dr. i?engel is the recipient of several outstanding teacher awards, and he has received the ASEE Meriam/Wiley Distinguished Author Award for excellence in authorship in 1992 and again in 2000. Dr. i?engel is a registered Professional Engineer in the State of Nevada, and is a member of the American Society of Mechanical Engineers (ASME) and the American Society for Engineering Education (ASEE). Robert H. Turner is Professor Emeritus of Mechanical Engineering at the University of Nevada, Reno (UNR). He earned a B.S. and M.S. from the University of California at Berkeley, and his Ph.D. from UCLA, all in mechanical engineering. He worked in industry for 18 years, including nine years at Cal Tech's Jet Propulsion Laboratory (JPL). Dr. Turner then joined the University of Nevada in 1983. His research interests include solar and renewable energy applications, thermal sciences, and energy conservation. He established and was the first director of the Industrial Assessment Center at the University of Nevada. For 20 years Dr. Turner has designed the solar components of many houses. In 199495, in a cooperative effort between UNR and Erciyes University in Kayseri, Turkey, he designed and oversaw construction of the fully instrumented Solar Research Laboratory at Erciyes University, featuring 130 square meters of site-integrated solar collectors. His interest in applications has led Dr. Turner to maintain an active consulting practice. Dr. Turner is a registered Professional Engineer and is a member of the American Society of Mechanical Engineers (ASME) and the American Society of Heating, Refrigeration, and Air Conditioning Engineers (ASHRAE). John M. Cimbala is Professor of Mechanical Engineering at The Pennsyli?vania State University (Penn State), University Park, PA. He received his B.S. in Aerospace Engi-neering from Penn State and his M.S. in Aeronautics from the California Institute of Technology (CalTech). He received his Ph.D. in Aeronautics from CalTech in 1984. His research areas include experimental and computational fluid mechani?ics and heat transfer, turbulence, turbulence modeling, turbomachinery, indoor air quality, and air pollution control. Professor Cimbala completed sabbatical leaves at NASA Langley Research Center (199394), where he advanced his knowledge of computational fluid dynamics (CFD), and at Weir American Hydro (201011), where he performed CFD analyses to assist in the design of hydroturbines. Dr. Cimbala is the author o