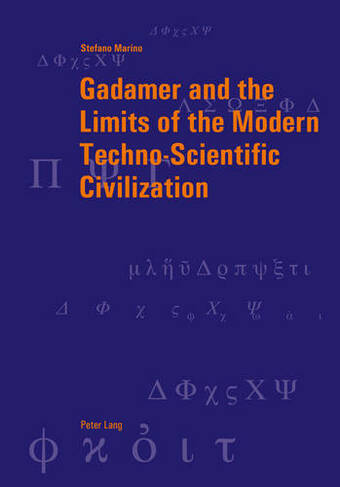 This book is an attempt to provide a systematic interpretation of Hans-Georg Gadamer's hermeneutics in light of one of the most important, interesting and debated questions of the present age: the question concerning the role played by science and technology in shaping our civilization. The author argues that this question lies at the heart of Gadamer's thought, and that such an approach to his philosophy might help to overcome some inveterate interpretive prejudices, like, for example, the idea of Gadamer as an anti-scientific and politically authoritarian thinker. In order to clarify these points, the author closely examines not only Gadamer's 1960 masterpiece, Wahrheit und Methode, or his main writings (later gathered in ten volumes of collected papers), but most of the works he published in his more than centenarian life, including many short essays, lectures and interviews. Gadamer's hermeneutics is seen as offering both an intriguing description of the main "pathologies" of the Western modern civilization, and a challenging proposal for "healing" the uneasiness and malaise of modernity by revaluating all forms of unmethodical, i.e. non-scientific, experience and knowledge.

Stefano Marino (1976) graduated in Musicology from the University of Bologna (2001), and in Philosophy from the University of Parma (2004). In 2008 he obtained his PhD in Philosophy at the University of Bologna, with a focus on aesthetics and ethics. He cooperates with research and teaching activities at the Departments of Philosophy of the Universities of Bologna and Freiburg. His PhD thesis was adapted and developed into his first book Ermeneutica filosofica e crisi della modernita (2009). He also published a book on Th. W. Adorno entitled Un intreccio dialettico (2010). He is the author of many articles and essays published in proceedings and philosophical journals, and he is the co-editor of the collections of papers I sentieri di Zarathustra (2009) and Domandare con Gadamer (2011).