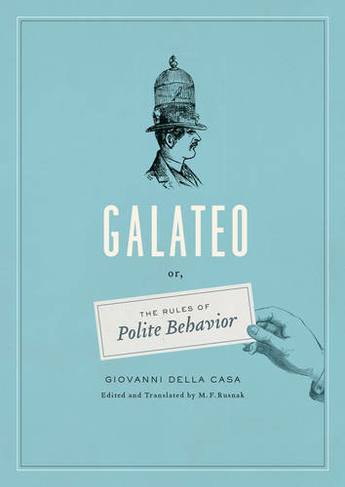 Galateo Or, the Rules of Polite Behavior

Galateo is a treatise on polite behavior written by Giovanni Della Casa (1503-56) for the benefit of his nephew, a young Florentine destined for greatness. In the voice of a cranky yet genial old uncle, Della Casa offers the distillation of what he has learned over a lifetime of public service as diplomat and papal nuncio. As relevant today as it was in Renaissance Italy, Galateo deals with subjects as varied as dress codes, charming conversation and off-color jokes, eating habits and hairstyles, and literary language. In its time, Galateo circulated as widely as Machiavelli's Prince and Castiglione's Book of the Courtier. Mirroring what Machiavelli did for promoting political behavior, and what Castiglione did for behavior at court, Della Casa here creates a picture of the refined man caught in a world in which embarrassment and vulgarity prevail. Less a treatise promoting courtly values or a manual of savoir faire, it is rather a meditation on conformity and the law, on perfection and rules, but also an exasperated - often theatrical-reaction to the diverse ways in which people make fools of themselves in everyday social situations. 4 halftones

Giovanni Della Casa (1503-56) was a celebrated Italian writer and diplomat whose works in Latin and Italian spread across a stunning range of poetic and prose genres. M. F. Rusnak is a translator, professor, and writer. He lives in Princeton, New Jersey, and Florence, Italy.