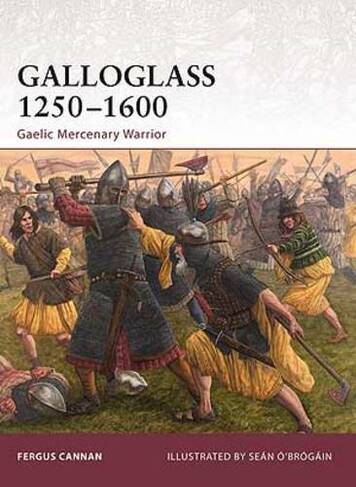 Galloglass, from the Gaelic galloglaigh for 'foreign warriors', were mercenaries from the Western Isles of Scotland who fought in the retinues of Irish magnates from the mid-13th century until the early 17th century. This work looks at the clan and family structures of the galloglass, their performance in battle, their weapons and armor and how these were made and by whom. The unique fighting skills and tactics of the galloglass are also studied, as well as how they were organized on the battlefield and their command structures and systems of rank. Illustrations (chiefly col.)

Fergus Cannan is a writer and historian descended from an assortment of Highland warriors, Jacobites and bonnet lairds. With degrees from King's College London and Bristol University, he is a countryman who worked for eight years in museums, and has published widely on the military, social and art history of the medieval British Isles.