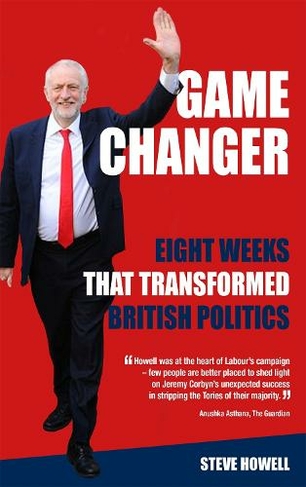 By Steve Howell (Author)
Hardback
https://www.whsmith.co.uk/products/game-changer-eight-weeks-that-transformed-british-politics-inside-corbyns-election-machine-digital-o/steve-howell/hardback/9781786155863-12-000.html £12.79 rrp £15.99 Save £3.20 (20%)
GBP
Availability
In Stock
Free Delivery Available When You Spend £25 Or More
Details
Spend £25 On Eligible Products To Recieve Free Standard Delivery To You Home Or Free Next Working Day Click And Collect To Store
Share

'If you want to get the inside account of Labour's historic general election campaign, I couldn't recommend more former Corbyn staffer Steve Howell's Game Changer.' Owen Jones 'Game Changer is a vivid account of what it was like to be in the engine room of Jeremy Corbyn's remarkable election campaign.' Dennis Kavanagh, Emeritus Professor of Politics, University of Liverpool When Theresa May called a snap election in 2017, Labour was more than twenty points behind in the polls and it seemed the only question was how big her landslide would be. In the most dramatic election of modern times, Corbyn's inspirational campaign transformed British politics. Labour won its best vote for twenty years and the largest increase in its vote share since 1945. Far from winning a landslide, the Tories were left without a majority and forced to abandon many of their unpopular plans. Steve Howell was at the centre of Corbyn's election machine. A member of the Labour leader's strategy group, he was involved in all the key campaign decisions. From the outset, he believed that Corbyn's campaigning skills, enthusiastic army of supporters and hopeful message could produce a surge in support. In Game Changer, he tells the story of eight weeks that transformed British politics.

Steve Howell was Jeremy Corbyn's deputy director of strategy and communications during the 2017 General Election.Drafted in earlier in the year, his task was to help Corbyn and his team turn Labour's fortunes around and prepare for the snap that duly came.A former BBC journalist, Howell had run a successful communications consultancy for twenty years and was winding down to retirement when the call came. But, as a Labour Party member and Corbyn supporter, he could hardly turn down one last fling in the national political arena.He was a member a Corbyn's election strategy group and involved in all the key campaign decisions. In the Sunday Times he was described as "unhinged" because of his optimistic view of Corbyn's chances. The Guardian reported that "insiders say he is making his presence felt".Howell first became active in politics as a teenager when he and Peter Mandelson formed a branch of the Labour Party Young Socialists in Hendon. Working for Corbyn, he found himself fighting to prove his old friend wrong.