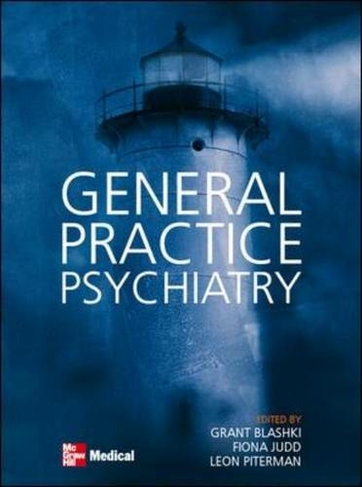 General Practice Psychiatry is compiled by a combination of practitioners and academics working in general/family practice, psychiatry and psychology. As General or Family Practitioners (GPs) are often the first contact for clients with mental health issues, this book focuses on higher prevalence disorders and common problems that GPs may encounter, and offers a systematic, highly practical, problem-based approach to their diagnosis and treatment. General Practice Psychiatry also offers current guidelines on pharmacotherapies regularly used in the treatment of such psychiatric disorders and illnesses. 25 Illustrations, unspecified

Dr Grant Blashki (MD, MBBS, FRACGP) is a practising GP, a Fellow of the Royal Australian College of General Practitioners and a Senior Lecturer at Monash University (honorary), University of Melbourne and Kings College London (honorary). He has a strong commitment to improving mental health care in primary care settings and has written over 30 peer reviewed publications as well as undertaken numerous research projects relating to this field. For over a decade he has worked closely with Professor Fiona Judd and Professor Leon Piterman, developing general practitioner training in psychiatry, including national and international conferences and developing a masters of general practice psychiatry. He has been particularly inspired by his father Dr Tim Blashki, who undertook pioneering general practice psychiatry research in the late 1960s. Leon Piterman (Mmed, MedSt, MRCP, FRACGP) is Professor of General Practice, Head of the School of Primary Health Care and Senior Deputy Dean of the Faculty of Medicine, Nursing and Health Sciences at Monash University. Having graduated in 1971 from the University of Melbourne, after a number of residency posts in Melbourne and London, he combined clinical general practice with a part-time academic career at Monash until 1993, when he took up the post of Director of Graduate Studies in the Department of General Practice. He is responsible for establishing Australias largest and most successful university based Diploma/Masters in Family Medicine for general practitioners. This program has produced over 1000 graduates nationally and internationally. In 1996, along with Fiona Judd and Grant Blashki, he was responsible for establishing the General Practice Psychiatry Program, which led to the development of the Graduate Certificate and Masters in General Practice Psychiatry and laid the foundations for research in Primary Care Mental Health at Monash University. His other academic interests are in medical education, cardiovascular disease and chronic disease management. Fiona Judd (MD, DPM, FRANZCP) is Professor of Rural Mental Health, School of Psychology, Psychiatry and Psychological Medicine at Monash University. Her interest in general practice psychiatry was kindled when working with Professor Brian Davies, the Foundation Professor of Psychiatry at the University of Melbourne, who emphasised in clinical work, teaching and research the key role played by general practitioners in the care of people with mental health problems and mental illness. Between 1986 and 1995 Dr Judd worked with Professor Graham Burrows in the organisation and delivery of the University of Melbournes annual continuing education program, Psychiatry for Non-Psychiatrists. Subsequently, together with Leon Piterman and Grant Blashki, she was responsible for developing the General Practice Psychiatry Program, a joint initiative of the University of Melbourne and Monash University departments of Psychiatry and General Practice. Her other academic interests are in medical workforce, anxiety and depression, rural mental health and help-seeking behaviours by those with mental health problems.