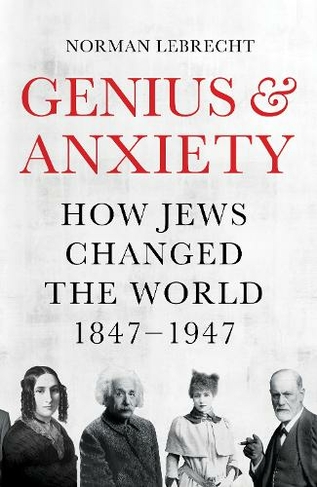 By Norman Lebrecht (Author)
Hardback
£16.00 rrp £20.00 Save £4.00 (20%)
GBP
Availability
In Stock
Free Delivery Available When You Spend £25 Or More
Details
Spend £25 On Products To Receive Free Standard Delivery To Your Home Or Free Next Day Click and Collect To Stores
Share

Marx, Freud, Proust, Einstein, Bernhardt and Kafka. Between the middle of the nineteenth and twentieth centuries a few dozen men and women changed the way we see the world. But many have vanished from our collective memory despite their enduring importance in our daily lives. Without Karl Landsteiner, for instance, there would be no blood transfusions or major surgery. Without Paul Ehrlich no chemotherapy. Without Siegfried Marcus no motor car. Without Rosalind Franklin genetic science would look very different. Without Fritz Haber there would not be enough food to sustain life on earth. These visionaries all have something in common - their Jewish origins and a gift for thinking outside the box. In 1847 the Jewish people made up less than 0.25% of the world's population, and yet they saw what others could not. How? 16 greyscale chapter frontispieces

Norman Lebrecht is the author of twelve works of non-fiction, including the international bestsellers The Maestro Myth, Why Mahler? and The Life and Death of Classical Music, which have been translated into seventeen languages. His first novel, The Song of Names, won a Whitbread Award and is being released this year as a major feature film. He now writes for the Spectator and the Wall Street Journal, and is working on his fourth novel. He lives in London. @NLebrecht normanlebrecht.com