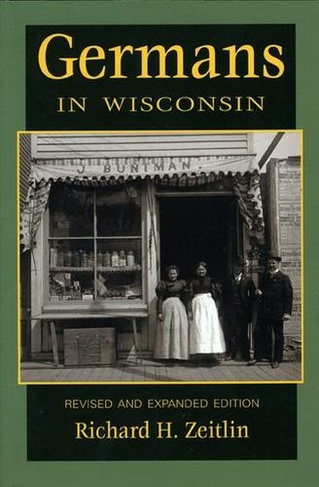 Also available on eBook for £3.95. Click here to purchase from Rakuten Kobo

Between 1820 and 1910, nearly five and a half million German-speaking immigrants came to the United States in search of new homes, new opportunities, and freedom from European tyrannies. Most settled in the Midwest, and many came to Wisconsin, whose rich farmlands and rising cities attracted three major waves of immigrants. By 1900, German farmers, merchants, manufacturers, editors, and educators--to say nothing of German churches (both Catholic and Lutheran), cultural institutions, food, and folkways--had all set their mark upon Wisconsin. In the most recent census (1990), more than 53 percent of the state's residents considered themselves "German"--the highest of any state in the Union. In this best-selling book, now with updated text and additional historical photographs, Richard H. Zeitlin describes the values and ideas the Germans brought with them from the Old Country; highlights their achievements on the farm, in the workplace, and in the academy over the course of 150 years; and explains why their impact has been so profound and pervasive. 12 b&w photographs, maps, 1 chart

Richard H. Zeitlin was born in New York City in 1945. He did his undergraduate work at Queens College and earned both a master's degree and a doctorate in history at the University of Wisconsin, the latter in 1973. He worked for Old World Wisconsin, the State Historical Society's outdoor ethnic musuem, between 1973 and 1977. He served as director of the Wisconsin Veterans Museum on Madison's Capitol Square until his death in December of 2008.