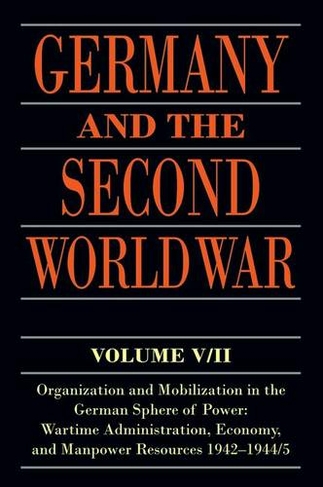 Volume V Part II of the comprehensive and authoritative Germany and the Second World War series spans the years 1942 to 1945, and looks in closely researched detail, and against a background of growing military setbacks and disasters leading to final defeat, at the administration and ruthless exploitation of the occupied countries and of Germany's own allies, and the effect on their populations (in particular their Jews, Roma, and Sinti) and national economies. This comprehensive study of the meteoric rise to prominence of Hitler's crown prince Albert Speer, and his struggle to implement a 'total war' armaments policy in the face of opposition from the Party's Gauleiters and political rivals in the Nazi leadership, documents with a wealth of maps, diagrams, and tables the achievements of the arms drive he masterminded; a large part of this success is shown to have relied on the forced or slave labour of those under German domination. The conflicting claims of industry and the Wehrmacht for dwindling manpower resources are also considered. 11 maps, 2 maps as endpapers, 76 diagrams