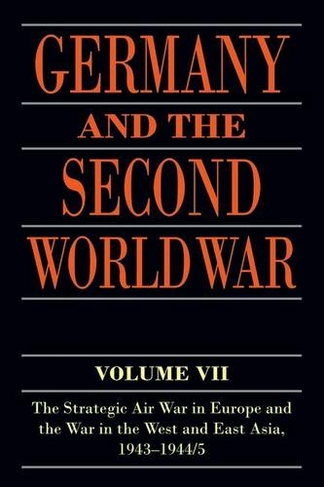 By the spring of 1943, after the defeat at Stalingrad, the writing was on the wall. But while commanders close to the troops on Germany's various fronts were beginning to read it, those at the top were resolutely looking the other way. This seventh volume in the magisterial 10-volume series from the Militargeschichtliches Forschungsamt [Research Institute for Military History] shows both Germany and her Japanese ally on the defensive, from 1943 into early 1945. It looks in depth at the strategic air war over the Reich and the mounting toll taken in the Battles of the Ruhr, Hamburg, and Berlin, and at the "Battle of the Radar Sets" so central to them all. The collapse of the Luftwaffe in its retaliatory role led to hopes being pinned on the revolutionary V-weapons, whose dramatic but ultimately fruitless achievements are chronicled. The Luftwaffe's weakness in defence is seen during the Normandy invasion, Operation overlord, an account of the planning, preparation and execution of which form the central part of this volume together with the landings in the south of France, the setback suffered at Arnhem, and the German counter-offensive in the Ardennes. The final part follows the fortunes of Germany's ally fighting in the Pacific, Burma, Thailand, and China, with American forces capturing islands ever closer to Japan's homeland, and culminates in her capitulation and the creation of a new postwar order in the Far East. The struggle between internal factions in the Japanese high command and imperial court is studied in detail, and highlights an interesting contrast with the intolerance of all dissent that typified the Nazi power structure. Based on meticulous research by MGFA's team of historians at Potsdam, this analysis of events is illustrated by a wealth of tables and maps covering aspects ranging from Germany's radar defence system and the targets of RAF Bomber Command and the US 8th Air Force, through the break-out from the Normandy beachhead, to the battles for Iwo Jima and Okinawa.