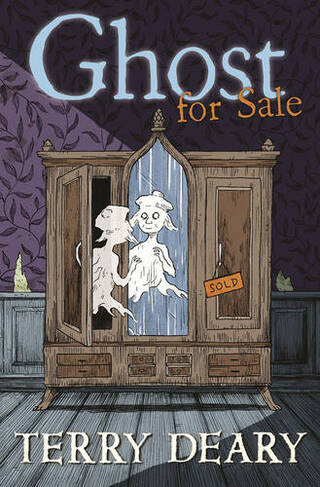 By Stefano Tambellini (Author)
Paperback
https://www.whsmith.co.uk/products/ghost-for-sale/stefano-tambellini/paperback/9781781125182-12-000.html N/A
GBP
Availability
Currently unavailable. We dont know when or if this item will be back in stock
Free Saver Delivery on orders over £25
Details
FREE SHIPPING over £25 for Saver Delivery
Share

A wardrobe causes all manner of mayhem in this great fun ghost story! When Mr and Mrs Rundle buy a haunted wardrobe to attract more customers to their inn, there are some unexpected results. Particularly suitable for struggling, reluctant and dyslexic readers aged 7+

Terry Deary is the author of 270 books over a period of 38 years and is one of the most successful children's authors of all time. His books have sold over 27 million copies worldwide and been translated into over 40 languages, as well as the Horrible Histories series being adapted into a BAFTA award-winning television series for CBBC. Terry was also voted The Outstanding Non-Fiction Author of the 20th Century (Books for Keeps), and he is the 10th most borrowed author in British libraries.

Ghost for Sale
Ghost for Sale
Stefano Tambellini
Paperback
Currently unavailable. We dont know when or if this item will be back in stock
https://www.whsmith.co.uk/products/ghost-for-sale/stefano-tambellini/paperback/9781781125182.html N/A
GBP